Because We Built It Part 2

Because We Built It - Part 1: Swapping and Trucking

"This card is very good in Nisei Division. Also, anywhere.”

Welcome back to Because We Built It! What a month of playtesting we’ve had. Hope you had fun with the netdecks, and that you’re all ready to build some decks.

Previously on BWBI Part I...

In this article we reviewed why players seem to fail at deckbuilding in general, and that netdecking is a good way of learning what the designer is thinking.

Hopefully everyone built and played a netdeck. I’d like to pass on thanks to Mendex, MasterAir, and Cerberus for their kind advice on the forums. To answer a few questions on the deck builds and how to use them: 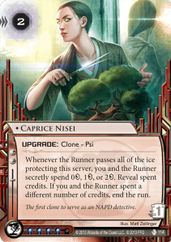 Hayley was a rather difficult one to play – sorry, I just wanted something that wasn’t PrePaid Kate. However, players found that installing quickly and keeping a threat on the scoring server is key to putting the game in their favour.

I didn’t get a lot of feedback on the other decks on the forums.

My decks were MaxX and NBN, and they played very well. My views on the decks are as follows: 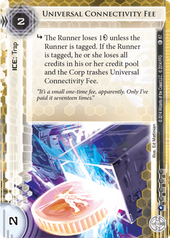 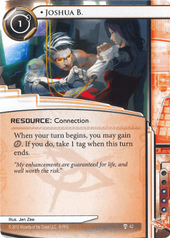 Thanks for all your views! Onto this week’s article:

As part of the homework, you were asked to watch the Manchester Server finale. If there’s one lesson we can learn from the video, it would be that decks always go wrong somewhere. Cards don’t work, Liz Mills should be an Ice Wall, etc. If we take this view on deckbuilding, you’re going to build a bad deck.

We’ve all built a deck by saying ‘I never used this card, let’s put this in instead’. However, the deck doesn’t get better – each time, it gets slightly worse, and you lose the aim of your deck.

Remember why we used the netdecks – the designers have tested why certain cards work and other cards don’t. They’ve played these bad cards, and it’s the fact that they can admit their mistake and UNDO their decision is what makes good deckbuilding.

So, one lesson this week is:

“We all make bad plays, and decks have bad days, but bad ideas will always be bad”.

The main thought experiment for this week is knowing why certain cards work and other cards don’t in a deck. Your netdeck designers have chosen the card for a certain reason, and it’s the understanding about these cards that will make you a better deckbuilder.

To show this, let’s take the operations from Jinteki/Neutral that make money. Have a look at the cards, and rank their use in a Jinteki Replicating perfection glacier deck:

The main question is “How did you come to that decision?”.

The first deciding factor can be cost. Jinteki is an inherently poor corporation – they rely on charity donations or marketing to get their point across. In effect, they are cousins of NBN – NBN is also poor, but relies on runner decisions and the use of current data to make their money.

Ranking by cost, we get:

Celebrity Gift – 3 (and a click, but this isn’t very important for cost)

Looking at this, Restructure seems like a very heavy investment for Jinteki – if the corporation doesn’t have 10 credits during their turn, they’ll never use Restructure all game. For deckbuilding, Restructure shouldn’t be used in Jinteki.*

(*You can, of course, use Restructure – it might be difficult to do so due to the high cost)

The second factor is profit per click. This is how many credits you get per click after using the card. For instance, Hedge Fund gives 9, and costs 5 – therefore, hedge Fund gives 4 credits PpC. Ranking using PpC, we get:

Just by using two rankings of the cards, Medical Research Fundraiser and Celebrity Gift seem very good – 5 and 3.5 respective credits profit through playing one card. Amazing! While Subliminal Messaging seems good, it lacks the surge of credits. Diversified Portfolio is an odd case – if you have 5 or more remotes, it’s excellent. If you don’t, it gets worse.

Finally, we can rank on a cost/benefit analysis. This is where we look at any other benefits/costs not covered by gaining credits. There’s not really an order to this, but it’s looking at what cards can/can’t be played:

Subliminal Messaging – Can be played for a ‘free’ click, comes back to hand if runner doesn’t run.

…And it’s here that we finally see Alex White’s choice of putting Celebrity Gift and Hedge Fund in his deck. Medical Research Fundraiser’s huge downside is that you give the runner money. In fact, the credit swing (how much more money you gained as the corp compared to the runner) is 2. Medical Research Fundraiser hasn’t given you lots of money – it merely made you slightly richer than the runner. Now, this could be essential in Jinteki, as you need money for your Psi games and to rez ICE. Yet, you also allowed the runner to have money for breakers, events…in short, you made the game go faster.

Hopefully, you found that a fun exercise. This is what deckbuilding is all about – comparing cards, choosing the best card for the job (not the one that is rarely played/used), and seeing if it works by practicing with it.

Month 2 – Swap around ONE set of cards, and playtest with it. If it works, keep it. If it doesn’t, swap it back as soon as you can.

For this month, we’re sticking with the netdecks and modifying them. This means choosing 3 cards of a certain type per week, changing them, and then seeing if your deck performs better or worse. If it’s better, and better against most decks, keep it in. If it fails immediately, or later on in the month, swap it back. 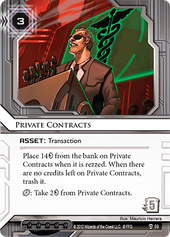 I would suggest that Week 1 concentrates on Assets/Resources, Week 2 is Upgrades/Hardware, Week 3 is ICE/programs, and week 4 is Events/Operations. You can do these weeks in any order you like, but please only change one thing at a time. Agendas are a tricky thing to swap – I’ll cover these next week, but you may change your agenda suite if you wish on one of the weeks.

For some ideas, check out the list below. Note that I haven’t chosen necessarily ‘better’ cards, just ones that can be tested:

Agendas – Swap a Hades Fragment for a Utopia Fragment.

Agendas – Swap 2 Mandatory Upgrades for 2 Project Ares. (Watch the look of horror on many runner’s faces)

Week 3 – Remove an Architect for a Taurus, remove 2 Information Overload for 2 Pachinko, swap 3 Data Ravens for Gutenberg. (Note: Don’t do all of these!)

Week 1 – Replace a Symmetrical Visage with a Professional Contacts

Week 3 – Remove an Atman for a Crypsis

Week 3 – Perfect programs for the job.

Week 3 – Swap 3 Knight for a combination of Faust and D4vid.

Week 4 – Swap a Spooned for Vamp

Remember these are only ideas, so feel free to use whatever you can think of. Try to keep influence in the deck if you can, but feel free to change this too. Just make little changes, for big results.

Feel free to drop me a message on your progress!