I’ve been thinking more and more recently about the two Chronos Protocol Identities and which one I will vote for, I’ve been wavering back and forth between them for a variety of reasons.

Here are my thoughts on them... 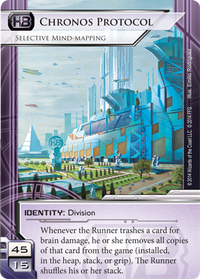 This was the identity that I was going to gut reaction vote for, and the reason for that is definitely the fact that I think Haas-Bioroid is in a very bad way currently for deck variety. I’m aware that they have more cards than any other faction, but let’s be honest, what do you ever see played in a tournament environment other than HB Fast Advance? I’ve seen a few big ice decks, and I know that there was one that won a Plugged In event, but these are the exception. I don’t mind HBFA, but I wish there were more competitive decks available for the faction right now. This was why my gut reaction was to pick this identity, because I thought a brain damage focused deck would be interesting, and take the faction in a new direction. I wasn’t off put by the fact that there isn’t enough brain damage cards currently, as I am certain that there will be enough by the time it is printed, and the game is forever growing.

I’ve moved away from this logic a bit over the last few weeks, and a conversation that I had with someone at a tournament made me think really hard about this identity. HB definitely need a new deck type we agreed but is this the brain damage ID that is right for them. There is no denying that it is a strong ability, however it isn’t one that you can easily control due to the random damage. It is this reason that made me start to think that maybe this isn’t the right ability, is its impact too random for it to be good at a competitive level? I am certain that if this hits the right cards it could kill a decks economy or breaker suite, but what happens when you hit some brain damage and kill their unneeded Plascrete Carapace or their last copy of Sure Gamble, it’s an ‘who cares’ moment.

I’ve also been thinking about the meta, and the impact that a successful deck design of this ID would have. Let’s be honest and say that Corroder is the barrier breaker that everyone plays, cards like Power Shutdown are often specifically targeting this if they can. But with this identity in the meta and being successful, people would be less inclined to run just Corroder, suddenly it would be worthwhile to play a mix of breakers and other cards as have 3x a card would be much more risky especially if it is installed. Therefore, I think that this card would be good for the meta game and change things up a bit. 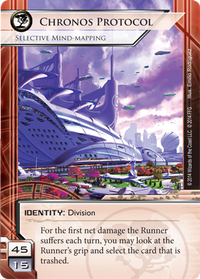 I’m not a Jinteki fan boy, I think I would have been if they hadn’t been weak for so long. I’m not a big fan of bluffing or mind games, that isn’t what the game is about for me. But I do love the theme and I think that of all of the corporations they have the best theme and it is only getting stronger with Honour and Profit. That being said, I do like this version of the Chronos Protocol, I like the fact that it is a way for the corporation to be the aggressor. I am sure if it sees play there will be a lot people playing decks with every net damage trigger available, Shock, Snare, Fetal AI, Junebug, Neural EMP etc. I’m not convinced that this is right, it is easy to become too obsessed with the theme of a deck and sometimes this becomes less good. I’ve seen this with some Reina Roja decks. It should be about tactical sniping of key cards, this means that the damage wants to be something you control.

I suppose that the counter argument to this identity is that Jinteki already have a net damage based identity and therefore doesn’t need this like HB needs a new deck type. I think this may be sufficiently different, information is power in Netrunner, does my opponent have an Inside Job to get into my remote? Let’s have a look and then make the play based on what we see. I think that they would promote different deck types, both doing damage but the CP ID is much more about sniping key cards and getting information at a key time.

I don’t think that this identity changes the meta in the same way that the HB one could. While this ID allows the corp to be much more aggressive which I like, I don’t see people changing decks or play styles against it. I already make a point of installing key breakers or other cards against Jinteki because otherwise random damage can ruin your day, the same is true for against this ability, if you have drawn a key breaker, play it as otherwise you will lose it.

I want the HB one to come into the game and have a strong deck archetype, I’m aware that this will require support from new cards, but it will be a long time until we see this printed so it could be viable when it comes out. If this happens I think that the meta will change and it will mean different cards are played and this will be good for the game in general (I cannot remember the last time someone played a Battering Ram against me). However there is also the chance that the HB one is printed and it doesn’t change the meta and it isn’t a viable deck type even with new cards, and therefore nothing will change for HB and the slightly dull position it is in now.

The Jinteki one is a safe bet, it isn’t dependant on new cards, it will just be good and interesting and allow more aggressive corp play. However it won’t fix a faction that is lacking deck variety or possibly change the meta, it is just a different version of an existing card. I’m actually excited to try this identity in a Neural EMP, Power Shutdown, Archived Memories and/or Jackson Howard deck where you snipe key breakers or tutors from hand and then PS any that make it into play.

I still don’t have a final answer on which one I am going to vote for, but I am currently swaying towards the Jinteki one, however a new card being revealed that would team well with the HB one may change my mind...

Anyway, just some thoughts I’ve been having about the Chronos Protocol Tour, which I am definitely pretty excited about! Do you have any thoughts on our two choices?