Flavour of the Month (Dec)

Flavour of the Month (December) 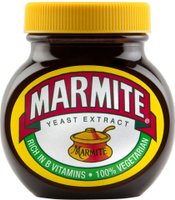 Yuletide greetings to one and all as I present my Christmas gift to you all; another exciting instalment of our flavour of the month feature (humour and charm sold separately)!

With the general hubbub of Worlds 2014 now fading, people are starting to look toward the new tournament season with a twinkle in their eye and many a cunning plan in tow. Certainly in our own meta we’ve seen a huge move towards more aggressive tag and bag decks, with our last major tournament (youtube coverage coming the channel soon) containing a staggering amount of flatline wins. The rise of Blue Sun seems central to this, along with increasing representation of Making News and NEH scorched style decks. One look at the recent tournament winning lists on Stimhack.com corroborates this, with a significant portion of lists on the front page being designed around the flatline. Indeed, as I’m writing this, they’ve just posted up an article on ‘How to Get a Win with Murder’, something that has once again become increasingly common.

This month, all the creativity seems to be coming out of Canada (or at least that who seems to be most consistent at posting up their winning decks!) so in our first visit to the land of Maple Syrup, we goto the Comic Hunter Store with a Blue Sun deck.

Though this tournament was fairly small at 11 players, I really like some of the deck choices and think there’s more to discuss here in terms of BS strengths. 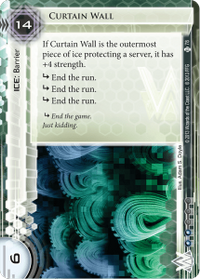 Being able to ‘bank’ your money into ice and then reclaim that money when needed is very strong, both for the Sea Source > Scorched x2 win, and to enable key economy cards like Restructure. Being able to bring back rezzed cards is a huge boon in any deck with Tollbooth (as we see in this list) or Lotus Field because it completely negates the common counters to those cards; Femme and Knight. A typical play in this instance is to simply bounce back the Tollbooth after the runner has Femmed it, install it back into place and then put the Runner in the position of finding another solution or breaking it with a fixed breaker (expensive). The other strong play, which everyone should be familiar with at this stage is to Oversight AI an expensive piece of ice so that it can be bounced back to hand next turn for a huge profit (the best target being Curtain Wall). Increasingly, Runners now have to factor a way of breaking the early doors OAI Curtain Wall to try and deny the Corp a blisteringly fast start. I know that my Shaper deck usually packs a 1x D4v1d, specifically for dealing with the turn 1 / 2 Curtain Wall. Even Breach can be fairly effective at breaking a Curtain Wall 1 off, though a smart Corp player may try to install the Curtain Wall on a remote to negate this threat.

The ice itself is a great mix of early game and late game, with the added bonus of the early game ice regaining its value once the breaker to deal with it has hit the table. For instance, Datapike is a perfect choice for BS, although it is expensive it will usually hit at least once, and if as a result it then forces out a Yog or Gordian Blade, it can be bounced back to hand next turn. The same is true of Caduceus, another piece of ice that loses its value as soon as Mimic is installed or Hive when the Corp has started to score agendas. Adonis Campaign is the final great bounce target, bringing it back to hand before it exhausts or even as a pseudo Beanstalk Royalties. This deck also has the ability to tutor for it (or for Jackson Howard) in the shape of Executive Boot Camp, a card which if rezzed also makes Adonis a one man economy machine which has to be dealt with.

With all this money to hand, the Corporation can setup brutal scoring remotes and in this case (another popular choice for the archetype), the inclusion of Ash can force the Runner to hit said remote twice and setup large scoring windows, made all the more reliable by Atlas tokens. 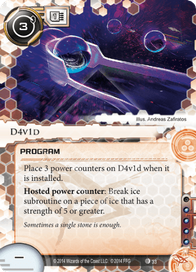 The agenda mix up also includes one of the most seemingly underrated cards in Blue Sun, Corporate War. It’s pretty difficult to not get the extra credits out of scoring Corporate War and can act as a brilliant economy card. Project Atlas makes the scorched earth win that much more reliable and can tutor for key cards when needed.

It’s a difficult Corp to play against, especially for most Anarchs who rely heavily on Parasites and Knights to get past taxing ice, their only saving grace being D4v1d, which seems to becoming an auto include in any Anarch deck. That being said, Quetzal with E3 probably has a good chance at applying heavy pressure across the board given that BS is usually flush with Barriers. Other popular includes in this archetype are Power Shutdown to try and keep Barrier breakers off the table or a different style of agenda mix up (Hostiles and Posted Bounty) to enable the inclusion of Archer and to potentially make the flatline more reliable.

1x Plascrete Carapace (What Lies Ahead)

1x Switchblade (Up and Over) 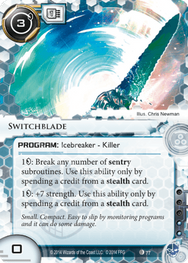 Though this bears the hallmark of many Gabe decks from the past, there’s little doubt that this is a very new spin on one of the oldest runner archetypes in the game. The inclusion of Switchblade as a ‘solve all’ sentry solution is becoming more common in Criminal, though it certainly does require a decent amount of support in order for it to become effective due to it requiring 2 stealth credits to break anything. In light of this, many Switchblade decks seem to also be running 3x Ghost Runner to try and improve the consistency of stealth credits. This deck however, also has a lot of sentry support in the shape of 3x Faerie, 1x Mimic and 1x Femme so even if the stealth puzzle doesn’t quite come together in a game, it’s not completely left in the lurch. 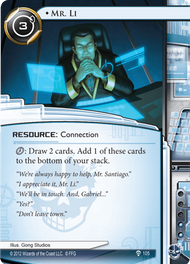 Mr Li acts as support to find the right piece at the right time (and in some ways I feel like 2x Mr Li here is probably the right decision) with 1 of cards including Feedback Filter (to deal with PE), Plascrete and Kati Jones (for taxing decks). As deck space becomes tighter, with more corp threats to consider (rather than just standard AstroBiotics), Mr Li seems to be gaining more value as time goes on.

Criminal is definitely here to stay after its overwhelming success (again) at Worlds, it definitely seems better equipped to deal with fast advance and even with a significant portion of taxing decks while its economy can outpace a lot of flatline decks without even trying.

The final deck I want to look at is another unusual spin on an overwhelming popular archetype, and Worlds 2014 winner; Replicating Perfection. This is once again taken from a tournament in Canada, over at the MeepleMart store GNK tournament of 29 players.

3x Hostile Infrastructure (All That Remains) 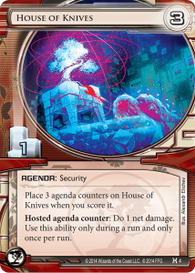 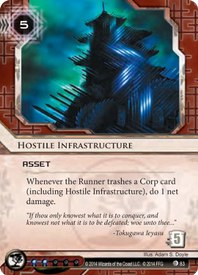 This list is deliciously mean, taxing cards, clicks and economy through the use of key RP staples like Komainu, Pup and Tsurugi. The key difference is the focus on net damage as a means of taxation, and possibly even a flatline. With the choice of Fetal AI over Nisei Mk II (and what a huge call that is) and the inclusion of 3x House of Knives, the agenda mix up is completely different, and geared for a very different style of game (with a scored Philotic threat that can’t be ignored late game).

The misery is further compounded by 3x Snare and 3x Hostile Infrastructure, making R&D digs a thoroughly depressing prospect. Hostile Infrastructure has some real potential in this style of deck (14 assets), making the trashing of Sundews and Jackson Howards unappealing and potentially making Snare fatal in and of itself (4 net damage and a tag, ouch). If a House of Knives gets scored, suddenly, any run can be lethal and Komainu becomes a taxation nightmare (because you sure as hell can’t take the net damage). 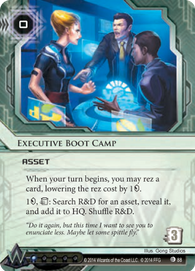 Though the deck has lost the 3x Mental Health Clinic from the standard RP archetype (for obvious reasons), the deck should still have plenty of money with a fairly standard RP economy setup and for the most part, the ICE suite hovers around the mid-range for rez costs (no Tollbooths or Wall of Thorns). 2x Ichi 1.0 is always a decent include in RP though I’ll admit that I’d definitely want to find room for 1x Inazuma for that alone (will also be incredibly strong in front of Komainu). If there is one glaring weakness it probably lies in the ice count which is quite low for RP, who wants to ice up centrals and protect Sundews quickly (especially without Mental Health Clinic). An overzealous runner will almost certainly impale themselves on this deck however, so it can probably recover quickly from being ice light.

Again we see Executive Boot Camp included, along with 2x Interns to try and make Assets as reliable as possible (I’m guessing you really want to see Hostile Infrastructure as early as possible here). Finally we also see the 1x Scorched Earth splash, something more common out of Personal Evolution, though very difficult to deal with here. Though I couldn’t say for sure, I’m guessing that flatlines make up a significant portion of wins for this deck, not many people see a net damage style RP deck coming!

So that’s all for December, if you have spotted any successful quirky decks (because any of us can design unsuccessful quirky decks ;)) online or in your local meta, please get in contact with me via email or on our forums. We’ll be back in flavour country in the new year, it’s a big country (also, go Canada!).