The Jinteki nuns are miserable. The cause of their misery is clear, no-one seems to win with them in competitive settings. Now I know that statement is bound to illicit responses along the lines of 'but I won my tournament with Jinteki!' or 'my Jinteki deck is undefeated!' I think for arguments sake, it's best if we leave individual metas alone for the time being. The fact is that the recent national/worldwide tournament statistics paint an alarming picture.

Jinteki accounted for a single win during the plugged in tour and was statistically, the least played faction across the entire tournament. It seems to struggle with consistency and though many people are fans of the style of play, most corp players prefer the more reliable options of a tag and bag deck or a fast advance deck of some kind. Unsuprisingly, when Dave H recently looked at the Corp meta, his analysis left Jinteki alone, simply because it hasn't been that successful compared to the aforementioned archetypes.

So has anything changed in the mean time? Recent datapacks have been kind to Jinteki (and obviously everyone got Jackson Howard!) and we're starting to see a real solid, operation based economy emerging for them. Key cards have included; 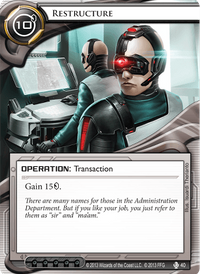 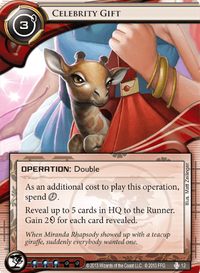 Though celebrity was out during worlds/plugged in, its power has continued to grow in conjunction with Restructure. All of a sudden, Jinteki has the means to get from 3 credits, all the way to 15 in one turn. That is not something to be sneezed at, and in many respects, is one of the more reliable methods of achieveing any kind of consistency out of Restructure. Hedge Fund is another great click 3 play after Gift. 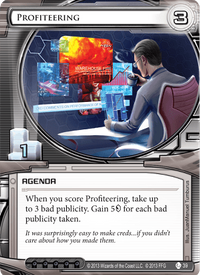 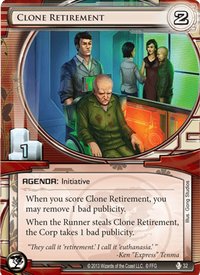 Two great agendas that make a significant difference to most Jinteki decks. Being able to score points out of hand for Jinteki cannot be underestimated, especially when 1 point of net damage can be attached to it too. Add even further value when including Archer in your deck! Profiteering offers another way to go from 3 credits to 15 in one turn, adding further value to Restructure. 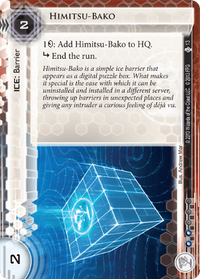 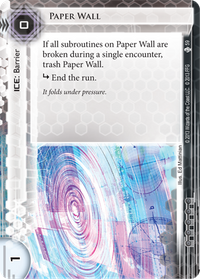 Both great early game ETR options for Jinteki that don't require splashing for ICE wall. It should be said that Trick of Light fast advance decks still want ICE wall, but that doesn't negate the usefulness of either of these cards. These become even more useful with the following card; 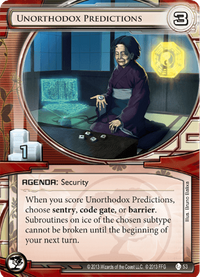 A great card to enable a quick 3 point score over two turns that is virtually impossible to stop (barring femme and inside job). The trick will be to install and advance X2 before scoring it the following turn, installing something like a Braintrust and then selecting a subtype that protects as many servers as possible.

As long as you're aware that your servers don't suddenly become inpregnable, this can be used to really crank the early game pressure on the runner. Just be careful of the test run Femme etc.

Though it is impossible to tell at this stage if these cards will impact the overall meta significantly or increase Jinteki players in tournaments, it does seem like they're getting a lot of joy at the moment.

Additionally, it looks like they will get a lot more as future data packs are released. Future Jinteki cards include; 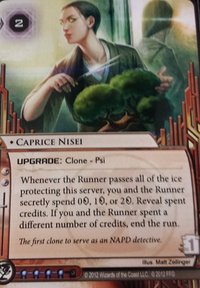 A giant of a card for Jinteki, something that can shut runs down for as long as you're lucky. In conjunction with Nisei end the run counters and unorthodox predictions, it will soon be tough to get into Jinteki servers even with a full breaker suite.

With a cost of 4 influence, it is a strong auto include in almost any Jinteki deck, either for protecting R&D or for protecting your agenda scoring remote server. Potential synergy with off the grid or even with the RP ID. Could be a real force! 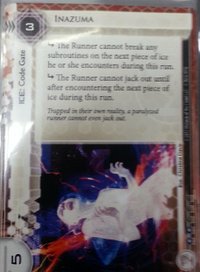 This card is 'Kind of a Big Deal.' I suspect it will change the meta for corps and runner alike and will be splashed out of faction frequently. It's only 2 influence so it won't be exclusive to Jinteki but its effect will be a tough nut to crack. With a whopping 5 str and an affordable 3 credits to rez, it's a card that can guarentee an end the run or do some significant damage to the runner's rig or hand. Imagine this into an archer! Ouch!

Rumours persist that the next big box will be Jinteki/Criminal, and one would have to assume that they will get some great toys to play with.

So having read this article, FFG decided to take immediate action by annoucing the aforementioned big box; Honour and Profit. I am therefore cheating with the article a little bit by adding a few more key cards that will shake things up in the year to come. Please don't judge me! 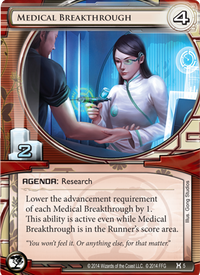 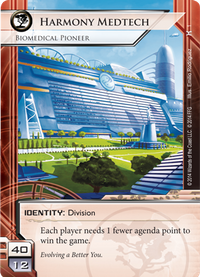 An agenda that has an upside when stolen! A really strong match point card that can on occasion, be scored out of hand. While this isn't anywhere near as strong as Astroscript, it is almost another 3/2 agenda for Jinteki, you almost want the runner to steal one early, especially in the new Jineki rush style decks that will be emerging with Harmony Medtech. People play slowly against Jinteki at the best of times, so we can only assume that Medtech will be a very strong ID option with Medical Breakthrough, especially with the following card: 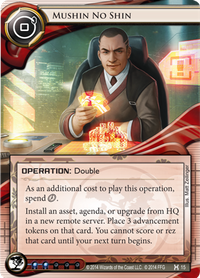 Yeah, this card a monster. Just to recap what you can do for FREE here; You install a card and advance it 3 times with A CLICK TO SPARE. That's nuts, simply nuts. Who cares if you can't score the damn thing the same turn, the runner has to chance running headlong into a 3-4 advanced Junebug. Or you could get a Ronin nicely prepped for the flatline. Or you could blast out a 3pt agenda and be half way home with the Medtech ID. Or you can shove the advancements on an upgrade for safekeeping with Trick of Light. All for free kids. At only 2 influence, expect to see this splashed in other factions but the joy of the card is that its effect is so beautifully suited to Jinteki decks and it makes for a fantastic economy card for them as well as the mindgame potential (turn 1 Mushin, dare you to run?).

Expect to see this card a lot.

While we wait in agony for 6 months, there have been some strong Jinteki ideas emerging from the Netrunner community. The strongest of these to come to light recently for me is the 'Never Advance' deck designed by Lysander. With better agendas, Jinteki has more options and better defensive tools. They finally have the cash to fast advance, even if they are missing that key second 3/2 agenda and a plethora of 1 pt agendas has led to many a 'bleed' deck being designed.

So maybe, just maybe, the hills will be alive with the sound of net damage at a tournament near you soon. 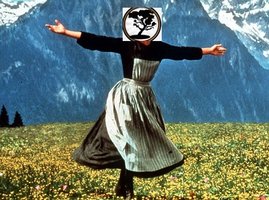 Discuss this Article on our Forums