Dave “Cerberus” Hoyland has written an excellent article about the state of Criminal. He poses a difficult question: what is wrong with the faction that dominated the tournament scene up until the end of 2014? Judging from Stimhack.com and other online sources, we see less Criminal presence overall and even less top performances. Criminal is mostly gone right now, at least based on winning deck lists and forum posts. Cerberus is highlighting several flaws in Criminal deck construction, such as weak non-killer breakers, no R&D pressure, and lack of recursion. The combination of these put a strain on influence allocation in Criminal decks. He is also pointing out the changes to the Corp metagame, focusing on Caprice Nisei and the recent introduction of Marcus Batty, two upgrades that seem to harm Criminal the most. He wraps up his piece with ideas for potential future cards that could help the faction, and hints at the untapped deck space that might include a competitive Criminal build. We cannot do much about the former; my purpose here is to focus on the latter. What would be a good starting point for a Criminal build?

Two clarifications are in order. One, I am thinking about a November 2015 metagame, the shape of Android: Netrunner as it will be played in Fantasy Flight Games’s Worlds Championship. Two, this article revolves around theorycrafting and untested ideas. My personal interests lie elsewhere right now (I am taking my Nasir Meidan Solidarity build to Worlds), but I think that this article might offer some potential starting points to any Criminal aficionados. 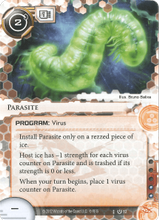 First, what Criminal decks have already been established? At least two builds reached top performance in the past year. Stealth Andy faired well versus Sentry-heavy RP glacier builds (forcing RP to tone down that aspect of their ice mix) while still getting wins versus other Corp decks. Dave’s Leela build is another good option, an opportunistic build that forces the Corp to either slow down or risk a waterfall following an agenda score or steal. In addition to these, AndySucker was a star of Worlds 2014, though it lost much of its popularity as RP Glacier became prominent. All three of these builds still have a lot of potential when introducing new cards and sharpening their core strengths -- for example, adding Parasite to AndySucker. Furthermore, now that NEH AstroBiotics survived the Clot storm, all three of these deserve attention as they tried and tested versus NBN’s brand of fast advance.

With that said, let’s consider how to take Criminal to the next level. Dave focused on the factions’ weaknesses. Let’s turn the tables and examine its strengths. There are are three main points that distinguish Criminal from the other factions.

Following the above, here are some ideas for relevant cards that Criminal might want to adopt. 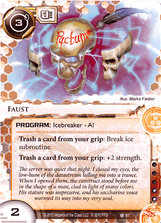 Faust, Drug Dealer, and Fisk Investment Seminar. AIs are among the strongest icebreakers -- while they each come with some disadvantage, their flexibility compensates for the special circumstances required to operate them. For Criminal, Faust is an especially attractive option, especially in combination with existing Datasucker-based builds. It opens up servers for that critical hit Criminals like, such as Legwork, Account Siphon, or a remote access. Criminal recently got two excellent draw options to feed Faust: Drug Dealer is a drip draw that takes a small toll of one credit, and Fisk Investment Seminar is a Diesel-like burst of three cards. While FIS accelerates the Corp as well, it could serve as quasi-R&D access by following it up with an HQ Interface run or Legwork.

Eater and DDoS. Eater is another potential AI for Criminal and DDoS, while not a breaker per se, makes running easier (especially in combination with Inside Job). These cards reinforce the necessity of double-icing servers to keep Criminals out, slowing down the Corp and leading to its stagnation in the early-game. 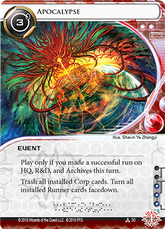 Vamp and Apocalypse. Criminals like the early-game, and these two cards allow resetting the game in order to again capitalize the faction’s strengths. Vamp has been seeing surprisingly little play since its release in Trace Amount, with very few leading archetypes utilizing it. In Criminal, Vamp is a great follow-up to Account Siphon and sits well with Siphon recursion decks if the Corp runs out of control. Apocalypse utterly destroys the Corp’s tableau; you cannot ask for a better reset button, though its side effects require specific deck construction. Once you build your deck accordingly (if your only breaker is Faust, for example, if your rig is disposable -- see Geist below), Apocalypse could be a perfect splash into Criminal.

Parasite and Prey. Every once in a while a Criminal deck with 2x Parasite and 1x Clone Chip (or even 3x Parasite, 1x Clone Chip) makes an appearance and catches Corps off guard. The combination of ice destruction, early-game aggression, and economic pressure is powerful. AndySucker builds in particular are good targets for adding Parasite, and so are Leela builds (such as Dave’s Waltz). Prey is Parasite’s little brother that does not require outside support and has the potential to operate faster. It is two credits and one click cheaper, so sniping Pup and Pop-up is superior with Prey. While there’s a limit to what it can trash (maybe up to Eli 1.0, and even that as a late-game), its efficiency is alluring. 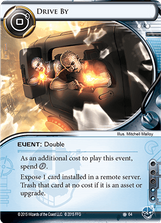 Drive By and Gang Sign. These Criminal cards have been released recently and have a lot of potential. Drive By forces an early upgrade rez (and if they don’t rez it in advance it can snipe a Caprice Nisei or a Marcus Batty) and doubles as an effective method to trash SanSan City Grid and Corp economy assets, two sources of headaches that no runner wants to deal with. Gang Sign is another break on the Corp’s plan -- score early and you risk losing an agenda from hand. I had a chance to experiment with these on both sides of the table, and they are promising.

Geist, along with Security Chip, Street Peddler, and DDoS again. All of these lead us to the elephant in the room: Criminal’s newest identity, Armand "Geist" Walker. To be honest, I initially thought that poor Geist is doomed as binder fodder. However, having played against him several times, I can attest to his speed and efficiency. I’ve only encountered “vanilla” Geist builds that try to build up and follow the usual Corp plan, and they were terrifying -- Geist can accelerate into a full rig in just a few turns, make a couple of decisive runs, then replace the one-time breakers with more permanent solutions. An additional advantage of his disposable rig is that it combos well with Account Siphon, Vamp, and potentially Apocalypse. You don’t care if your rig is gone if the Corp is crippled. Geist deserves more attention as a competitive runner.

I will leave you with two deck lists. First, a Geist build that was developed by Chris “ZeromusPE” Hinkes over a nice chunk of games. It’s a traditional Criminal build, aiming to threat a remote while recursing Account Siphon and applying economic pressure through Crescentus. Give it a shot, it’s surprisingly fast and catches many Corps off-guard: 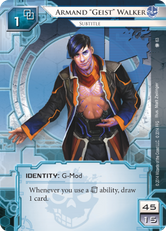 The following Leela deck started as Dave Hoyland’s “The Endless Waltz” deck and incorporates the Faust idea illustrated above (along with Drug Dealer and Fisk Investment Seminar, plus a surprise Parasite). I only played it a few times, so much more tuning is necessary, but it already shows a lot of potential. Faust works similarly to Crypsis upon Android: Netrunner’s original release, almost guaranteeing access to centrals and a remote which is not defended by a relevant upgrade: 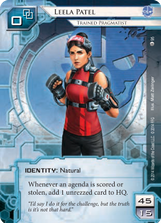 1x Plascrete Carapace (What Lies Ahead)

1x Utopia Shard (All That Remains) •

Going back to my Nasir Meidan article that was published by Stimhack on December 2014: the Netrunner community *still* has not explored the card pool enough. We have gone through Store Championships, Regionals, and Nationals, but the pool of competitive decks is rather slim. I wholeheartedly agree that unusual competitors appear every once in a while (such as the latest “Doomsday” Haarpsichord combo deck), but there has been little dedicated research. In my opinion, Criminal suffers from a negative hivemine stereotype; the previous “draw a card, play a card” mantra that served it so well work better out of Shaper now, so many have migrated there. If we (as a community) try some new ideas, some new directions, there is a strong possibility that a Criminal archetype will emerge.