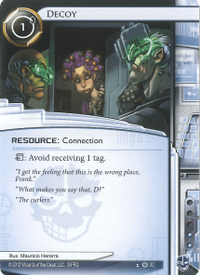 This is a great time to be playing Netrunner, with the Store Championships having just kicked off in the UK, and then with the Chronos Protocol Tour, Regionals and Nationals just around the corner.

I thought that I would record my (and to some degree my meta mates) journey through these events. I am hoping to attend at least one of each event, write reports on them, and describe our experiences and how our decks are changing based on these competitive experiences.

We’ve been working on a number of decks over the last few months, firstly an Andromeda deck, as currently she seems to be the strongest and that is probably what you want to take to big events. However we’ve been making some changes to the standard Andy decks by making some meta calls, firstly we’ve been adding a Decoy into the decks to take account of the large amount of Weyland that we’ve been seeing. Secondly, we’ve been adding in Compromised Employee (Both this and Decoy work well with the Hostage package) and running Easy Mark over Daily casts due to the amount of NBN and tag love that is around. 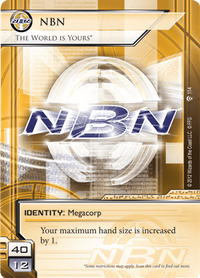 On the corp side we had been testing a lot more, unsure what the best fit is currently. We tested different variations of TWIY* both rush/FA strategy and FA/SE strategy. Both seemed quite strong and were definite possibilities, but we found that the rush deck bleeds agenda points in its wins, which may be okay until elimination but then it is a problem, and the SE one only works if the runner doesn’t see it coming and a single Plascrete Carapace causes it problems. We also tested various Weyland decks, many of these were very promising, especially the ones focusing on program destruction. I’d also been testing a HBFA variant with lots of assets with high trash costs, which had been working extremely well. There was no real consensus on what was best.

As we do every month we attended the Manaleak Netrunner tournament in Worcester, this was a great chance to try out our decks before some of the big events. In the end I took Andy and HB.

The tournament was four rounds of swiss, with 8 players in attendance. These were the identities played:

Round 1 vs Taurean - Gabe/Weyland BABW 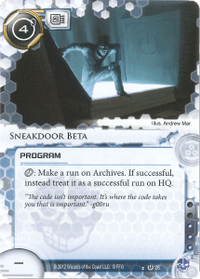 I corp first, and get a lucky first few turns, he Sneakdoors early and misses the 1 in 3 chance of scoring twice. I play lots of asset economy and Jackson Howards and he starts off trashing it but then gives up as it is hurting his economy too much and stopping him running. With my economy booming I am able to lock him out and use a San San City Grid to score three points, including a Gila Hands. A few turns later I Biotic another agenda and then Archive Memories it back for the game win a few turns later.

As runner, I burst economy early and make some runs discarding a Femme on the first turn as I am holding a Ninja and Datasucker. He plays an agenda behind a Chimera which I run, he thinks for a while and puts it as a code gate. I install Yog from hand and score it. A few turns later and he does the same again, obviously quite flooded with agendas, this time putting the Chimera as Sentry, so I play Ninja from hand to score it. The game is over a few turns later due to an open R&D and a bad Power Shutdown. 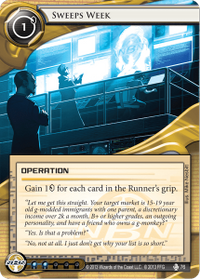 I corp first and start out with few ice, he scores my Gila from HQ early. But I manage to lock him out for long enough to Biotic Labour an ABT which gives me more ice (I had a JH out for protection). He is struggling to deal with my asset economy, especially the Eve’s and I am able to protect a San San long enough to score on it twice. I Biotic Labour out the last agenda for the win.

As runner he pulls off a Sweeps Week first turn followed by ice. Second turn he Sweeps Weeks again and Hedge Funds, allowing him to rez a Tollbooth on both HQ and R&D. I manage to shut one down following an Inside Job but my accesses don’t get me anything. He manages to secure a lot of his servers and score an Astro, he then chains this into another. I manage to pick up two Breaking News but he scores another agenda putting him on 6 points. I run as much as possible trying to get the agenda from hand but miss it and he scores out the next turn. 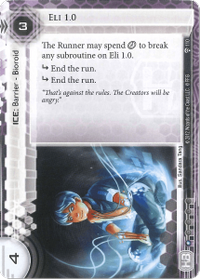 I start of running and the first three ice he rezzes are all Eli. I get a full rig set up and a Kati going, forgoing the early pressure due to the expense of Eli, but keeping his remote locked down. I make some R&D runs with an R&DI which are expensive but mostly paid with Datasucker counters. He manages to score an Astro which he uses to score a Gila Hands to keep his economy going. He also scores two Breaking News from hand, though while he is doing this I manage to score from R&D, getting up to four points. The end of the game comes when I make a bad play, we are both on match point and I have a tag, I can either play a Plascrete, going down to no credits, or take the risk he hasn’t splashed for SE. I play the Plascrete allowing him to play in his remote and install a new ice which stops me from being able to get in, those three credits would have made the difference, was a bad call.

I corp and need to play fast as we have 17 minutes remaining on the match up. He runs early and aggressively and manages to score four points while my economy is setting up, I manage to catch him with a destroyer and this allows me to rez a San San and start scoring. I protect it with everything and then lock R&D and am fortunate that I see the agendas before time. I am certain I had it locked down but if I could finish it was the problem, we finished we 2 minutes left.

I start off running and first turn he Celebrity Gifts showing me a hand with a Data Raven and Tollbooth, a Psychographics and an agenda. He plays an ice in front of HQ. I run R&D and economy, on his turn he plays an ice in front of a remote and plays a card behind it. I run HQ and he doesn’t rez, telling me he needs the credits, I run the remote and he rezzes a Tollbooth, so I shut it down and score the agenda behind it. I then set up an R&DI and lock him out, I manage to see agendas before he sees ice and when he does get some I just Special Order the breaker and win shortly after. 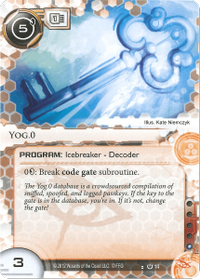 As corp I get agenda flooded early, so I secure HQ but this gives him time to set up a Yogosaurus and a Pro Contacts and Kati. My economy is solid but I can’t keep him out of my remote because of Tinkerings and Femme’s. He scores when I try and get agendas through and once from R&D, getting him to 5 points, I see a single Biotic Labour and use it, but don’t see anymore, or San San’s or Archived Memories. I manage to bluff an ABT as an asset economy and score it and use it as I have a hand of 4 agendas and there are 5 scored, only two more in the deck. It still manages to throw a Gila into archives which he takes putting him at 6. I mandatory draw into a San San, the draw again into another, and install them both. The following turn I score an agenda from hand using a San San. He clears Kati for lots of money and runs R&D with his R&D Interface, he doesn’t hit the only remaining agenda in the deck but does see the last San San, he trashes it and trashes the rezzed one thinking that he can keep me from scoring out of hand and just remote/R&D lock me, I rez the other San San and score for the win.

This leaves me with 12 out of a possible 16 prestige, which is enough to win the tournament.

The next person getting 10 points... There were a lot of really competitive matches and the quality of play at Manaleak has gone up considerably over the last few months.

So, how has this prepared me for the future tournaments? Well, the HB deck went undefeated and in its wins they were quite obviously wins with the exception of the last match where I felt it had a bad draw, seeing lots of agendas and no FA cards until the end. I’m pretty pleased with it, everything in the deck costs money to trash and runner economy just cannot keep up. When NAPD contract comes out I will be testing this in it, as it fits the theme of the deck so well. 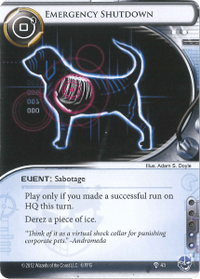 The Andy deck however, really did not perform, and several of my meta mates found the same thing. I think we are trying to do too much with it, adding in cards for certain popular deck types is actually weakening it. Also I saw a lot more big ice this tournament, with Tollbooth, Archer, Bastion etc all being very common and this is something that decks need to be able to deal with. Sweeps Week is also brutal when it allows for a first turn Tollbooth to be rezzed with credits to spare. I’ve made a lot of changes to the Andy deck, dropping the Compromised Employee’s as they didn’t do any work for me all tournament, the same with the Decoy. I’ve taken the stance that the improved Corp economy will allow bigger ice to be rezzed and therefore Emergency Shutdown is going to do extra work and am considering going up to three of them. I think I may also test out Gabe for a while and see if I can get the same level of success as with Andy, and then I will make a call on what I want to take to the bigger events.

I had a lot of fun, so next stop is doing a couple of Store Championships... That’ll be part 2...