Following the success of the first Hadrian’s Wall Tournament, during which no fires were started or limbs lost to misadventure, the Edinburgh Meta is pleased to announce the second UK Inter-City Friendly!

Once again teams from across the country will be invited to compete for the honour of hosting the next tournament and the incredibly desirable Inter-City Trophy.

Once you’ve done that all that remains is to join us on the 16th of January at the lovely Victoria Park Hotel in Edinburgh, which serves food and drink all day.

Other than the fact that the event will be a lot of fun, here’s what you need to know: 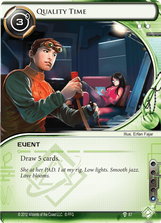 Head over to this Facebook event for updates on updates, prizes and social events on the weekend of the event:

And finally, huge thanks to Quinns and the London Netrunner scene for organising the first Inter-city Friendly and to everyone who attended and made it such a fantastic day. We hope you’ll all join us again this time for even more Quality Time.