Flavour of the Month

Flavour of the Month 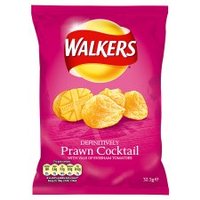 In what I hope will become a regular fixture, I'm intending to break down some of the tournament winning deck lists found on Stimhack.com to find some interesting ideas. Despite the dominace of NEH in the current meta, there is quite a lot of variety currently avaliable, especially with everyone trying to find the 'silver bullet' runner deck that can deal with both FA and taxing corp decks.

Typically, I'll focus on some of the bigger tournaments unless something exceptional catches my eye so some of analysis may be old hat, hopefully this can be a useful resource to newer deck builders though. 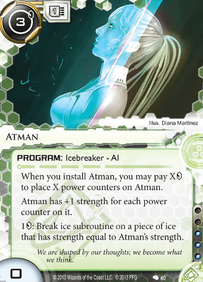 'Katman' like it's Worlds 2013 baby (for 2013 worlds no 2 list, see here)! There's no doubt that Katman has become a real force once again, with a list that has changed very little despite a years worth of datapacks. In fact the only real difference here is the addition of 1x Sharpshooter and 1x Inti for -1x Modded and -1x Daily Casts. Both changes make perfect sense given the prevalence of Wraparound and destroyers like Roto or Grim. 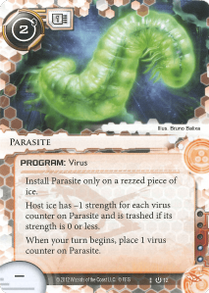 The concept is incredibly straightforward, get out the early econ and Datasucker to enable instant speed Parasite destruction and Atman to deal with everything else (usually you'll see an Atman at 0 str and 4 str). Clone Chips are used to recur said Parasite, gaining economic tempo with Kates passive ability and from Desperado. Inti is just for bringing down the strength of Wraparound or for blowing up Paper Walls while Femme neatly nullifies a Tollbooth. Finally, the deck has the important option of Deus X recursion against nasty Jinteki decks, allowing you to instant speed break AP ice as well as access remotes with relative security (with the important exception of Cerebral Overwriter).

The deck has the advantage of being strong against both Fast Advance (with the possible caveat that it doesn't have any HQ pressure at all beyond ice destruction) via R&D lock and low str ice decks and against more taxing setups (especially RP decks which rely on low str, high subroutine ice like Kom and Tsurgi). An Atman at 4 str deals with HB quite effectively as well though this might be one of its weaker match ups. A strong deck that hasn't changed much in over a year (with good reason) that offers significant consistency in both economic and tutoring terms while offering pressure across the board.

Cards up to Honor and Profit 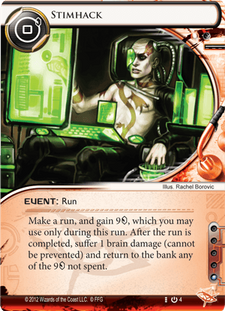 A deck that has been dubbed 'Stimshop' by most other commentators, effectively based around complete efficiency and speed. This deck can get setup incredibly quickly via a Magnum Opus fueled economy (which absolutely needs to be brought out turn 1 or turn 2 at the latest) and the use of Personal Workshop & Stimhack. With 3x Diesel and 3x Quality Time, there are very few occasions where you wont see the key cards quickly though as already stated, without the early doors MO and PW, this deck can struggle to get established in the game at all. This deck has great central pressure in the shape of Legworks, Makers Eyes and R&D Interfaces and great remote pressure with frugal use of Stimhack and Femme Fatale. Same Old Thing lets you recur key events which may also include Test Run for emergency tutoring if needed (especially given there are no Clone Chips here to recur SMC). 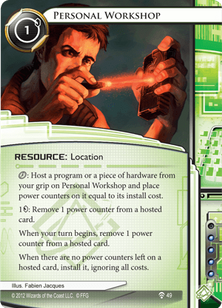 Bottom line here is that once MO is up and running, you need to get your breaker suite out asap with a combination of tutoring and PW stimshopping. Stopping the early Astro/Nisei score is kind of a big deal and this deck is well setup to deny remotes against most decks. Against taxing decks, never underestimate the power of the 'take 8 credits' turn, something that could be equally important against any deck you suspect of running scorches or punitives. With no Plascretes to speak of, the economic battle becomes all the more significant, especially with the rise of Midseason Scorch out of NEH. Without Deus X recursion, Jinteki probably ends up as this decks weaker match up, especially without Parasite to deal with low str/high sub ice. You certainly don't want to use cards like Makers Eye or Legwork against PE decks unless you're gunning for the last agenda points. With the click intensive nature of MO, RP probably has a leg up against this style of deck as well, especially with the power of Enhanced Login Protocol.

Still, a very strong early game deck, with the power of MO to power the late game in most situations, strong against NEH if only for the huge central pressure and all important remote pressure to deny the sansan server.

Oh my word this deck is fun. Been messing around with this one along with Dave Hoyland for kicks and without doubt I've had some of the most entertaining games of Netrunner I can recall from recent history. 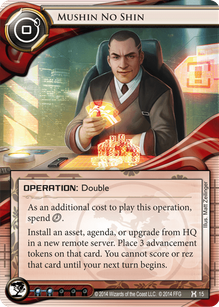 Based around the Cambridge Regional winner (videos avaliable of this deck in action here, here and here), effectively, you're looking to try and get HQ & R&D iced up if possible before setting out to install as many remote servers as you possibly can, using Mushin No Shin to get your Cerebrals or Ronins out asap with 3 advancement tokens. 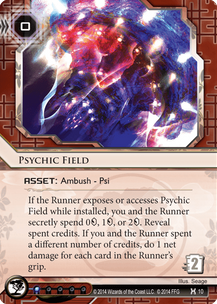 Never ice up your remotes, just play everything out undefended and try and sneak out an early Gila or House of Knives to really apply the pressure to the runner. Try and get a feel for what the runner will run and what they wont. If they are refusing to touch advanced cards, try and get your Ronins upto 4 advancements, ready for the Snare or Psychic Field access or just keep Neural EMP's and Scorch in hand ready to strike. Don't underestimate the backbreaking nature of hitting with Psychic Field, if a runner hits one click 2-4, they may be hard pressed to recover unless they have a Deus X out on the board. Even with full blown Deus X recursion, this deck can force real decision paralysis against Shapers, undoubtedly the faction best equipped to deal with it. I had a game against a Kate deck that was packing Net Shield and Deus X with this deck and though I lost, I still managed to get him down to just 2 cards in his stack.

Obviously very strong against Criminal and Anarch who don't have enough recursion to deal with key cards being removed from the grip (often allowing you to score out the key Gila Hands or House of Knives with relative impunity due to the lack of early game pressure) and who generally don't bother packing a Deus X.

This version is possibly lacking in economy a little, many lists like this I've seen (including the regional list) include Diversified Portfolio to give a little more wiggle room for triggering Snares or rezzing Komainu (if you're taking them). Equally, I think there's a strong argument to be made for including Eli's, but then the same could be said of pretty much any Corp deck!

Let me know what other decks you're seeing a great deal of or are having success with via the forums (link below), and I'll see you next month for yet more flavour country (it's a big country)!