The Eliphant in the Room

The Eliphant in the Room 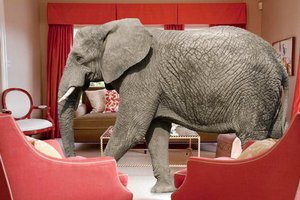 When I posted on Twitter that I was writing about what I saw was the most overpowered corp card in the game, fellow runners were guessing every card except for this one. This can mean one of two things. It could mean that you are going to read this article and then completely disagree with me (and please feel free too!), or, it could mean that it has simply become a 'Hedge Fund' card, a card which we all include because we'd be pretty stupid not too (it's not Hedge Fund by the way, that would probably be the most boring Netrunner article on the face of the earth :P). It could be viewed as a card which is the only solution to a vastly overpowered runner card...

It is a card which doesn't get talked about a huge amount, yet features in almost every single winning corp deck. No, it's not Jackson Howard! I actually believe that Jackson is a hugely important card for the corp, and that without it, Netrunner becomes less fun and more random. That being said, it means that NBN decks effectively have 3 extra influence to play with which is a little harsh considering how strong NBN is at the moment. Speaking of which, no, it's not Astroscript! Of course it goes without saying that Astroscript is also overpowered and needs some hard counters but it obviously can't find its way into the majority of corp decks (though I suspect that Worlds 2014 will do its very best to disprove this theory!). No, it's not Lotus Field! Lotus Field is a fairly balanced card in my eyes. It's strong, but there are plenty of cards that can deal with it cheaply (Knight, Femme or just a good old fashioned, non Yog code gate breaker). We also shouldn't discount the fact that it costs 5 to rez which is not insignificant. 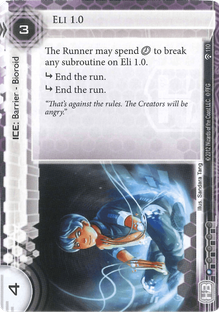 The card I'm talking about is Eli 1.0. A card so overpowered that it can make rush/fast advance decks into taxing nightmares. It's a card that can singlehandedly shut down access to central servers (especially if they get double stacked). It is unbelievably cheap to rez, has an insane amount of strength and multiple subroutines with a 'downside' that is actually an upside in disguise in a lot of cases. Quite simply, it is a card without equal on the corp side, and that has very few answers. And, it's 1 chuffing influence! 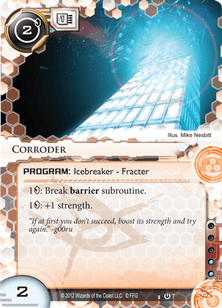 Eli itself, seems to be almost a direct reaction to the strength of Corroder, itself being a vastly overpowered breaker which knows no equal. With everyone and their mam packing Corroder since the days of Core, Barriers fast became early game roadblocks only, something to hurdle over once Corroder hit the table.

When we look at comparable barriers we see an alarming difference in power levels. For instance, Wall of Static costs the same to rez but can be broken for half the price (and as a single subroutine piece of ice, it can be dealt with effectively by Knight as well). Wall of Thorns has a whole 1 strength more than Eli, the same number of subroutines, yet is an incredible 8 credits to rez. Sure it can't be clicked through, but the investment that goes into rezzing the blasted thing is huge! Tollbooth is another strong piece of ice but again has the initial investment of 8 credits. The 3 credit swing is strong at the right time, though the answer for Tollbooth (Femme) is a pretty reliable means of dealing with its threat. 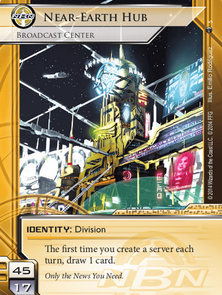 Part of what makes Eli so strong is that it fits in almost any deck (1 chuffing influence!) and does incredible work in the current strongest archetypes. With an extra 5 influence to spend , NEH loves their Eli's, whether it be a tag and bag style deck or the more traditional Astrobiotics. All NEH has to do to effectively win is lock down R&D and wait for the Astroscripts/Fast Tracks to fall into their hand. Eli is absolutely superb at this and runners are often left having to spend 3 clicks just to deny NEH their Astro's, something which isn't practical long term given how much draw they effectively have. R&D lock becomes 'the whole ball of wax' against NEH and Eli is a perfect solution at only 1 influence each. Against Replicating Perfection, Eli becomes 'God Tier', especially with an Enchanced Login Protocols on the table. From being a central taxation nightmare, Eli becomes a powerhouse on remote servers, especially for protecting Sundews or in a uber taxing, Caprice/Ash super server. RP without Eli's is just sheer folly. 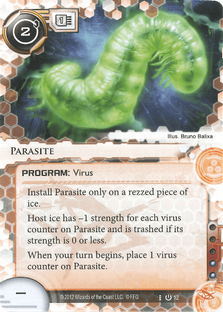 So what can effectively deal with an Eli? In my eyes, not a great deal. Arguably, Parasite and Datasucker counters are the only really cost effective way of dealing with it over a long term basis, and that requires a fair bit of setup time. Certainly I don't feel that Parasite on its own can be considered an effective means of dealing with Eli. Waiting 4 turns before hitting a central server is usually fatal, especially against NEH so realistically, you're going to need Datasucker counters to speed the process up. Unless you have a Desperado though, we're still talking about a 3 credit investment for dealing with a 3 credit investment (not counting the clicks to build up the tokens, we'll assume they built up naturally through normal play rather than having to waste clicks hitting archives for tokens). 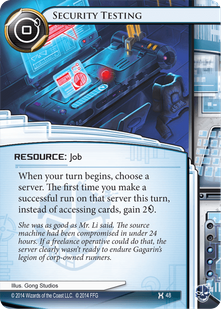 Corroder is the common solution to any barrier as already discussed but a whopping 4 credits each and every time you break it takes taxing to a whole other level. Knight also costs the same, and certainly ends up being unsustainable over the long term. Double Eli on R&D pretty much means you have to look elsewhere or spend your whole turn clicking through one Eli and then spending 4 credits on the next, hardly ideal unless you can make said run count with significant multi access. Effectively, Corroder turns Eli into an economic problem, though a hugely significant one. At this point we're looking at having to generate around 3-5 credits during early clicks to be able to run on an Eli central later on (or building up economically for a turn to enable pressure during the next turn, not a great idea when R&D lock is king in the current meta). This is the stage where we have to decide whether to take all the Kati Jones money in order to pressure an Eli central for a couple of turns or to spend a whole turn clicking Magnum Opus. I would suggest that the best economic answer probably ends up being a strong Andy Security Testing setup with Desperado, Datasucker and Security Testing all out on the board (probably with a Kati as well). 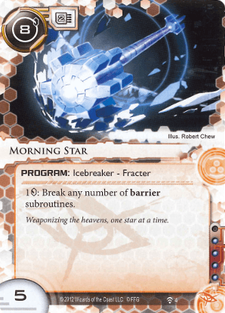 Femme is undeniably a poor reply, still costing 2 to bypass when it only cost 3 credits to rez it in the first place. I'll happily rez a blind femmed Eli every time, especially when you consider that beyond Test Run/Scavenge combos, it costs 9 credits to install in the first place. Importantly, this prevents Femme from being used on higher priority targets like Tollbooth or Komainu.

Morning Star is certainly a very strong option though much like Femme, ends up being prohibitively expensive to actually get on the board (and 2 memory in the late game for one breaker can be very challenging to find). It's definitely a card that you have to 'cheat' out in order for it to gain you any significant tempo which restricts it to Shaper (who may not want to spend the 4 influence to bring a singleton copy into their decks) or a Retrieval Run style Anarch deck (made more viable with cards like Duggars and Inject). It also leads to the problem that against pretty much every other Barrier in the game, it's complete overkill, making you wish you had a Corroder in your deck to use as well. 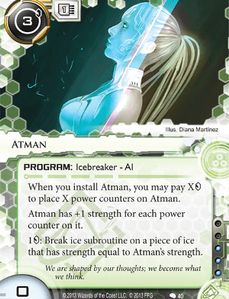 Another option could be to use the power of Dinosaurus (probably in faction only however) to boost the power of Corroder so that it's only 2 to break an Eli. This is fiddly to setup however, either requiring you to see the early doors Dinosaurus to install onto or using a Scavenge to reinstall a Corroder onto it. This is also brushing over the fact that Dinosaurus is still 5 credits to install, a significant tempo hit in almost any circumstance (and who really has that kind of time against NEH?).

The final card to consider is installing an Atman at 4 strength. This seems to be the best overall solution in my opinion though again, comes at a huge 7 credit cost and an ongoing payment of 2 credits to break the blasted thing. The benefit of Atman at 4 str though is that it also deals with other key taxing cards like Lotus Field and Ichi making it a far more cost effective proposition against a wider variety of matchups. I'm begining to edge towards including Atman in almost every deck, all the pain in the arse ice is invariably 4 strength.

All in all, Eli ends up leaving me a little despondent. There really aren't any reliable means of dealing with it beyond having a stupid amount of money or having a 'silver bullet' ready to go in your deck. The fact remains that you're going to be facing off against it in almost every matchup in the current meta (and consider yourself lucky if you don't!) and at 1 chuffing influence, I imagine that is set to continue for the forseeable future.