Because We Built It Part 1

Because We Built It - Part 1: Clicks and Clots

I can never seem to stick at article writing for too long. Maybe it’s my flaws (more on these later), but it’s difficult to convey your views in one article or even stick at your own writing style.

This is a similar problem to those wishing to deckbuild in Netrunner. You put some cards together, try, and it fails – so, you replace the ‘bad cards’, put in other cards…this time, it’s either slightly better or much worse. Sooner or later, you give up, hit NetrunnerDB (other netrunner websites are available), find a decklist, and play that for several months. You then try deckbuilding again, and the cycle continues.

This series of BWBI is a program, ‘designed’ to help and guide us all through the process of deckbuilding – from noticing ‘bad’ cards, to deck archtypes and working up to building your own Netrunner deck – with little help from me. Every month, I’ll write an article and some things to do/think about during the next month. We can then move on to something else next month. Please feel free to contact me via Netrunners with your deck ideas, thoughts, and feelings – I’ll include as many as I can in upcoming articles.

There are a number of reasons why deckbuilding goes wrong, or why your deck underperforms. Have a think about why your decks go wrong, and then compare them to the list below: 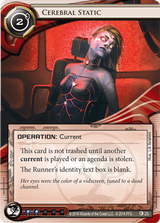 This is a very common one – I suffer from this all the time! Say you play criminal (Andromeda) and you play her for a while. You’re really good, win a few games – maybe even undefeated! Then, MaxX is released and your brain goes wild:

“I can play Account Siphon with more card draw”

“I can see more of my deck”

“Andy’s ability only works at the start, this is all game!”

NO. Resist the temptation to switch factions (or even identities). This causes you to start building two decks in your head – the one you just played, and the one you think you can play.

For this program, try and stick with one faction for runner and one faction for corp. This means that you’re not flitting between ideas or factions, so that your ideas can focus on two specific factions. 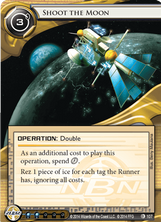 Think of the difference between the following card lists:

This is fairly easy – 2 and 3 will not make good decks ON THEIR OWN. Why? Because there’s no win in there.

1 allows you to kill most runners, 4 ends the run and gains money, 5 is pure economy – probably one of the best things to have in Netrunner. 1, 3, and 5 have all been included in some tournament-winning deck.

When deckbuilding, it’s easy to be distracted by shiny concepts and card combos. However, they rarely go off. Stop thinking card combos and tricks – start thinking general situations and good cards. Interesting point – what is a good card? I would define a good card as one you’re always happy to see.

•Angels (e.g. Cyberdex Virus Suite, Snatch and Grab, Plascrete Carapace) – cards that are not always useful, but help out in many sticky situations.

Make sure to start with good cards first, and then add in your tricks later. I’ll do an article on this in the future, but for now we’ll leave this topic. 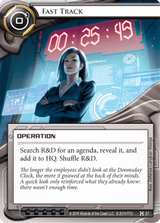 Yes, people work hard to create decks. You spent two hours on NRDB and you think you have a world-class deck? Think again. Decks take time and patience. If you want to deckbuild, you have to take time to make it your own – and make it good at the same time. 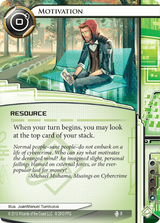 So, you’ve admitted you enjoy combo cards, have faction committal issues, and are impatient. Now I’ll say something that won’t sit well – YOU. Yes, you can be your own worst enemy. You’ve played too many decks, worried about too many ‘maybes’, and are hesitant to score out that Astroscript Pilot Program in case you get Clot-ted. In short, you’ve let yourself go. Today is a new start in your Netrunner life – this is the day you practice, watch, and reflect. Go to events/LFGS as much as possible, and play your deck. Play as many people as you can – even Dave Sutcliffe, if you’re lucky enough to give him a game! Watch games online – Team Covenant do excellent videos, Manchester Server has footage of its Regional, and Netrunners has videos from the Nationals. Watch good players play good decks, safe in the knowledge that every click they spend is a click closer to your learning. Finally, reflect on games. In particular, use this checklist to help you:

1. How did I win/lose? What cards allowed me to do this?

2. How did my opponent lose/win? Why? (Hint: Ask your opponent)

4. How likely was my win/lose? Did an agenda-flood happen? Did I use a combo?

5. Did I play to the best of my ability?

6. How could I play better?

7. How could the deck be better?

This ‘autopsy’, which should take no longer than 15 minutes (come on, we have other games to play!), will help focus you on you and your deck’s strengths/weaknesses.

Notice that Q7 is not ‘What cards can I add/take from the deck?’, because that is not constructive. If anything, you must make sure 100% that a card is not right for your deck before removing it.

This series is going to be aimed at Tier 1/2 decks. Netrunner is fun, absolutely, but we have to leave the fun decks to one side – at least for now. Play to have fun, but ultimately play as well as you can and try to win. This improves your match performance, and means that the deck can do its best too.

”OK, he has 14 credits and is playing Jinteki. I’ll run on your 4-unrezzed-ice-2-upgrade-1-advanced-card remote, please…” 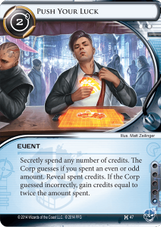 Play both sides. Obvious as it sounds, stop playing with your preferred side and play with your weaker side. Can’t win games as the runner? Put your corp away and play with your runner deck during practices. Your game will improve, and you’ll be more comfortable with the deck you play.

By taking these 6 steps on board, we can now look at your first exercise in deckbuilding – net decking.

Sorry, wait…netdecking? You want me to learn how to build a deck, by copying someone’s deck? Genius (!)

Of course this seems silly! However, the first thing we need to do is be consistent with your deck choices, and get you better at playing a certain tried and tested deck. This means that you avoid identity crises, and can instead focus on your ability and improving how you play. 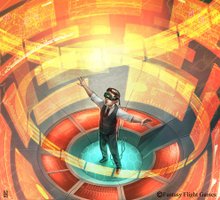 MONTH 1 – Choose a faction, a deck, and start practising.

For this program, I would like you to use one of the following corp or runner decks. If you’re feeling brave, you can choose one corp and one runner deck to play. Starting with one side is a good idea, as this lets you focus on making one deck good rather than two.

I’ve selected decks that rely on mostly economy, with a few highlights of why that identity/faction is good in Netrunner. For this program, I’ll choose to play NBN and Anarch.

Please pick one of the following:

This is a glacier style deck, which means there are a lot of defences to run past– they have to pass through lots of ICE, and they sometimes have to play a Caprice Nisei game in order to get in. Once it scores a Nisei Mk II, it’s very difficult to run again – the corp can choose when to end the run.

Seeing this being played brought a smile to my face – score well, score quickly, but be rich and make the runner poor. Caprice is here to help, and this will be interesting to change over the program. This is a taxing style of deck – making the runner spend a lot of money/time in order to get into servers.

Lizzy’s Breakfast proves two core Netrunner principles – cash is king, and nobody messes with Weyland. Blue Sun lets you have cash, and also teaches you about the importance of money vs. ICE in decks. This is a kill deck – allowing the runner to keep making runs, and trying to kill them if they try to win.

The first (and only!) deck I used to get to top 8 – NBN Scorched in 2013. It’s such a beautiful combo (Midseasons/SEA Source, Scorched, Scorched) that the runner is VERY scared to run on you if you have more money. While I would like a Closed Accounts in the deck to reset the money race for the runner, Universal Connectivity Fee does this job fine. The deck has two victory conditions – quickly score agendas or kill the runner. This is the best part about NBN – their complete diversity of play-styles. If you fancy trying this with Near Earth Hub, feel free – let me know whether it works for you. (NOTE: If using NEH, don’t add influence to your cards – just try it with the ability)

This deck is the closest we get to a ‘combo’ deck – stealth is incredibly powerful, but requires a lot of pieces to make it work. Nicole proves that Hayley Kaplin, and assembling your rig quickly, pays off. Shapers need to be efficient with their time, and rig building is an essential part of this.

Criminals enjoy messing up the corp’s game – every runner dreams of watching their opponent recoil at an Account Siphon. This deck shows it is possible to be richer than the corp, and to have fun doing it. It has a choice of icebreakers, to make the most out of each run.

Strengths: Very rich, tricks to slow down the corp, choice of rigs.

This is an amazing deck, but is very difficult to pilot. Most Anarch decks have very different playstyles, but MaxX sets out to do one thing – make the corp poor. Account Siphon them several times, then make runs and keep them down. Sooner or later, those 7 points are yours.

So, go forth and give these decks a try. Don’t try to change the deck – just play games and think about how/why you’re winning, what cards are good and why, and what cards could be taken out (NOT replaced!) and why.

•Choose a deck, build it, and start playing it.

•Reflect on how/why you are winning/losing

•Watch the final of Manchester Server Regionals 2015 – we’ll discuss this next time.

Feel free to drop me a message on your progress!