Now that Worlds 2015 is over I suggested to Dave that we should do a post-mortem of Leela to identify whether she was the right identity to play in the meta and whether we included the correct cards in the deck. Our entire chat that this article is based on can be found below if you’d like to listen to us discuss Leela in detail (and some other Android:Netrunner-related stuff!)

With the approaching advent of Worlds 2015 the two of us were considering the available deck options. Despite being long-time fans of Criminal, we had reservations about piloting the faction in Worlds: Criminal has several limitations that are difficult to overcome in the current card pool, as Dave pointed out well in his “Perfect Blue” article. Chief among them are the limited breaker suite and the lack of in-faction recursion and R&D pressure. Still, the faction keeps its charm, especially in an environment where horizontal decks (and NBN in particular) dominate. Over Twitter PMs we decided to gamble on a yellow Corp meta which made Criminal an attractive, if somewhat risky, option. Dave had decided to play his trustworthy Leela Patel early on in Worlds testing, and after several Andromeda games I decided to train as a pragmatist and sleeve Leela for Worlds as well.

If you’d like to read/hear more about the pre-Worlds decision, you’re welcome to read Dave’s Worlds report or listen to his interview with the Winning Agenda. It was very exciting to see almost twenty players piloting Leela at Worlds -- especially given that Dave has been a fan for almost a year, providing a lot of positive marketing. We would now like to turn our attention to the future of Criminal, and Leela in particular, and discuss our main observations from Worlds. 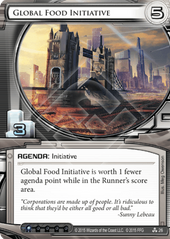 The biggest question is: was a horizontal-targeted Leela Patel the right choice for Worlds? Sadly, the answer is in the negative. Yes, Near-Earth Hub was the most popular Corp, Haarpsichord came in third (find the full statistics here), and Leela has a brilliant matchup against both. The thorny issue is the huge success of Food Coats builds. There was way more Food than we expected and they were much more successful, with the top 30 decks dominated by Food. Some of this might be due to the influx of Plascrete Carapace following the PSI Games in early October which lead to several top players abandoning Haarpsichord 24/7 kill decks. More importantly, Food Coats proved itself to be highly resilient to both Noise and Valencia DLR, allowing it to climb high. 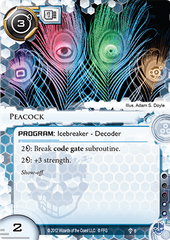 Given that Food Coats is Leela’s weakest matchup we both faced tough competition. Looking back on it now, Dave believes that it comes down to the big code gates, such as Tollbooth and Turing, as one of the main problems. Shaper has Cyber-Cypher, Anarch can use Faust, and both have access to D4v1d and Parasite recursion. The Criminal option for decoders is limited, and since D4v1d is not an Icebreaker it cannot be tutored using Special Order. We ended up using either Peacock or ZU.13 Key Master, which only work if you can limit your runs. Eli 1.0 is another issue: Criminal has neither “Lady” nor Parasites, so their solution is Corroder and Datasuckers. This leads to a triple whammy: a rig complicated by Datasucker, slow accumulation of Datasucker counters versus Food, and the prevalence of Cyberdex Security Suite all make this a weak approach.

We believe that this lesson is important for the upcoming Store Championship season. Right now there is a reasonable chance that Food will ride its success in Worlds to become the deck to beat, closely followed by the always-popular NEH AstroBiotics and some flavor of kill deck (either NEH or Haarpsichord). Criminal is a difficult choice in such a metagame. 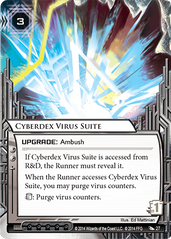 If you do take Leela, however, there are several modifications that can be done to Dave’s build to improve the Food matchup. First, the Bank Jobs and John Masanori should probably be replaced, perhaps with Daily Casts and Symmetrical Visage, respectively. Bank Jobs are a wasted draw in many Food matchups, and Masanori would not net the card economy required to sustain the deck. Both are still usable against Replicating Perfection (the other prominent Glacier build) but are a handicap versus the traditional Haas-Bioroid build. Next, the Datasuckers might need to come back: they help with Eli 1.0, Tollbooth, and potentially Assassin. Just remember Cyberdex Virus Suite -- it tends to appear at the most uncomfortable situations, and was the main motivation for removing Datasucker from the Worlds list.

The tricks package is also up for debate. It is unclear whether Emergency Shutdown is the right choice. Food quickly amasses a large bank to make it irrelevant while NBN builds are usually too fast and don’t have many targets. You might wish to replace it with a third Inside Job which gives you an early-game tempo boost and serves as a strong bypass and economy options later on. Other possible additions are more copies of Legwork and possibly one The Maker’s Eye. The goal is to increase run efficiency. By accessing more cards during each Central run, you reduce the credits spent on fueling breakers.

Whatever you do, you should probably keep two copies of Plascrete Carapace. We doubt that Haarpsichord (and related kill decks) are going anywhere anytime soon.

I think if we wanted to play Leela in the current meta we would test with something similar to this as a starting point: 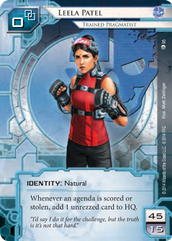 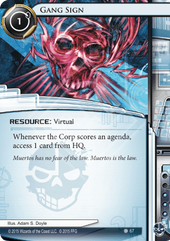 Leela is a challenging Criminal identity to pilot. Many Leela players are trying to build a perfect board position. They wait for the Corp to score, meanwhile setting up their rig and installing various cards that trigger on score, such as Logos or Gang Sign. The idea is that the Corp will score and that will set up the devastating run that will win the game. The problem with this approach is that you’re forfeiting the tempo advantage that lets Criminal shine. The Corp will score at the time that minimizes your ability’s impact. For example, if they install and advance a 3/2 agenda in their remote, they could later double advance it, score, and immediately reinstall the card you bounced -- gaining you almost nothing.

On the other hand, Dave’s playstyle is much more aggressive. Chris “ZeromusPE” Hinkes compared it to wielding a sniper rifle: it’s very powerful, but you need to get the headshot to make it work. One out of ten or twenty games you will get a “chain reaction” where a series of steals and bounces will outright win you the game. Most of the time, however, you need to have the perfect timing in order to steal an agenda when Leela’s ability deals the most damage. Keep the Corp in the early game by bouncing ice and applying economic pressure. Follow the “traditional” Criminal mantra, trying to nab as many points in the early game while forcing the Corp to overextend. 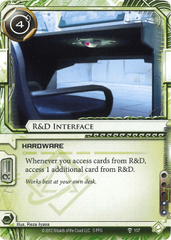 However, this stage is where Leela differs from other Criminal runners. Gabe or “Tenma” have to continue applying the pressure, even once the Corp manages to stabilize. This leads to the familiar Criminal problem of running out of steam. Leela utilizes the early tempo advantage to switch to “waiting mode”. This is similar to the approach we described above; the reason Leela is a skill test is because choosing when to transition is the key to her identity. Go for the aggro game but know when to stop. Get your breakers, set up your R&D Interfaces, draw your Account Siphons and Legwork. As the window arrives, switch back to being aggressive and find the agenda needed to bounce a rezzed card or another key piece of ice. Balance the aggro with the right amount of patience and control.

Continuing their tradition from last year, Fantasy Flight Games has spoiled a nice chunk of Mumbad cards through their website and the “Hardwired” draft. There are several cards that attracted our attention as potential tools for Leela and other Criminals. 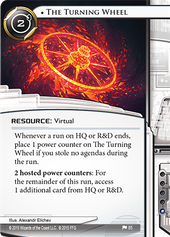 First and foremost, The Turning Wheel (TTW) is expected to fill multiple roles. By replacing R&D Interface with TTW you save three influence. These influence points could be used for handling code gates, perhaps in the form of Atman. The Turning Wheel also helps with run efficiency, allowing you to run centrals less often in your search for agendas. Finally, since it does not require an access to accumulate a counter, it works well with Account Siphon and Security Testing. You could run a server for 1-2 credits, but the TW counter will be worth the click. Leela rarely floats tags, making TTW a perfect fit. 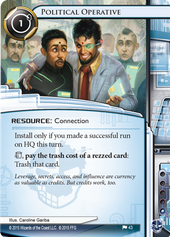 Political Operative promises to significantly help with the Food matchup. Oftentimes the Corp will not rez an early-game HQ ice in order to dodge a Siphon, giving you an easy window for getting the Operative on the table. Once it’s there it can hit on Caprice Nisei and Ash 2X3ZB9CY, opening up a remote or R&D that was previously inaccessible. Operative can also trash a Crisium that otherwise would have stopped a Siphon. Even against Adonis Campaign, being able to trash Operative before they get their first Adonis proc could set the Corp back enough. 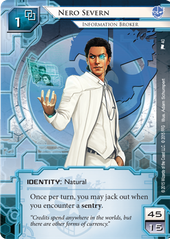 Mongoose is a new killer that appears to be reasonably efficient. It does not compete with Mimic directly (as breaking Architect is 3c), but could let Criminal get through Sentry towers more easily. We do not think that you replace any of the Faeries with Mongoose, but you might want to squeeze it in as a fifth killer.

Unless … you’re piloting Nero Severn, the shiny new Criminal identity. Nero feels like an Aggro Criminal except he does not have the economy boost that Gabe and Andromeda get. His ability to mostly ignore Sentries sounds powerful. The original problem of code gates and Eli 1.0 remain, however, so while he might be more efficient in handling Architect, Ichi 1.0, and Assassin, it remains to be seen whether he’s versatile enough to become competitive in tournaments.

We are still optimistic that Criminal could make a comeback as a faction. They were under-represented in Worlds, and sadly only one made it to the top 16. We hope to see higher Criminal presence in the upcoming store championship season -- and if not, as soon as The Turning Wheel is released.

We feel like we got the high volume of NBN decks correct and had a deck that could deal with the top archetypes in that faction. However we greatly mis-understood how strong Foodcoats was going to be, and that was a terrible matchup. In hindsight giving the deck some stronger economy options against glacier may have been the right call. Criminal is still a playable faction, and cards such as Political Operative and The Turning Wheel will hopefully help it return to having a top tier deck within the meta.