There's no Luck in Netrunner...

Ok, so that might be a somewhat exaggerated headline designed to make you angry enough to click and find out why I'm wrong, but since you're reading this then I feel justified that it works!

On a more serious note, I was inspired by an article recently written by Iain Reid, which delves not just into his journey through Netrunner's largest store championship to date, but also encourages us to find (and perhaps more importantly, listen to) our inner Sherlock; using inductive reasoning to analyse the board state based on what we know, and making our best guesses from that information. It's an excellent article, and if you haven't, you should go read it.

What stood out to me most are a couple of lines in particular, following the review of his first game:

"You could probably write a whole Netrunner article on optimised play for big digs, and Sherlock is right that it is not all luck and “random” accesses are often a bit of a misnomer. Still, I won’t deny there isn’t some chance involved. Neil’s probably right to feel a little down."

Now, the reason that this line stood out to me in particular is probably because I've been thinking about it a lot recently myself. And to give you some brief backstory on why I've been thinking about it myself, let me take you back to my own Store Championship. No, further, back to my pre-tournament preparation. Heck, actually, let's go all the way back to Christmas (this is relevant, I promise). 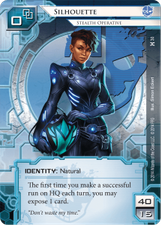 Seasonal holidays are an excellent time for me to play Netrunner, now that both of my brothers also play it. It’s also an excellent time for me to get out of my usual meta, and have decks that previously seemed good to be roundly and repeatedly thrashed due to unseen but inherent weaknesses. This is what happened to my Silhouette deck, one that I had previously been quite proud of, and that I thought worked. It didn't, and I see that now. I wasn’t very good with Criminals, and so building a Silhouette deck was especially tough. I wanted a lot from it, but couldn't figure out how I was supposed to build a deck with this ID that seemed, compared to other criminals especially, quite weak. In trying to summarise what I wanted to my brother, who is also in many ways my mentor, I fixed upon this aspect: I just want to create a speedy, aggressive, 40-card criminal deck. His response: “In order to build a good 40-card Criminal deck, you first have to know how to build a good 45-card Criminal deck”. So that was that, I tossed out Silhouette, tore the deck apart and started again from scratch. 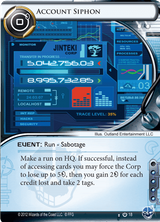 I wanted to get to the core of what Criminals can do, and what I wanted Criminals to do. The abilities and preferences of a player are just as important as the faction they use, and the deck needs to reflect that.

In the end, I decided I wanted to be quick off the mark, make lots of runs all the time and make the most of those runs. Ken Tenma seemed like an appropriate fit, along with as many Legworks, Maker's Eyes, Account Siphons, Retrieval Runs and even, yes, Recons as I could cram in. Once I'd decided the core idea of the deck, it took me about 10 minutes to throw it together. I figured that I'd run it for a bit, figure out the problems and learn from there.

Then an odd thing happened. 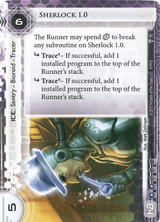 I played with it, and I won handily. Time and again. I figured it was just luck. Christmas finished, I took it back home with me, and it made huge waves there, too. On the eve of the Manchester Store Championship I made a decision that seemed absurd. Without having altered the deck from the original, 10 minute draft, I decided that this would be my runner deck for the tournament. I didn't get 100% win-rate with it or anything, but I did win a few good games. At this point, I realised I couldn't claim it was luck any more, and got to thinking about why this random deck was performing so well, and how I could go so long assuming that my victories were just dumb luck when I wouldn't make that assumption about most of my other decks. I guess I accessed my Sherlock to help me figure it out.

“It's quite elementary, my dear boy” he said to me. “It is all just luck after all. You're just missing the most important piece, and that is that you rely on luck so much, that you make your own”.

These are words that I would have to ponder, if I hadn't actually come up with them myself. In hindsight, it seems so obvious, but on the cyberspace battlefield, that “random” access that manages to hit a 3-point agenda for the win is easy to cast aside as luck. And in fact, I feel like too many games of Netrunner finish with lines like “oh man, I was so unlucky to draw this hand” or “if it hadn’t been for that lucky access, I/you would’ve found that so much harder”. It’s very rare that I hear it said bitterly, or belittlingly, but if you think about it, it is a little dismissive.

The truth is, I give myself so many opportunities to be 'lucky' that of course I'm going to hit the mark sometimes. And the more a strategy makes those 'lucky' wins the goal, the more often its going to get lucky. With a full set of deep digging, random access cards, the idea that any of my agenda accesses are 'lucky' is just as nonsensical as the idea that they're all perfectly strategised. Of course, Iain is right when he says that in order for deep digging events to work, you need to analyse the board position and give yourself the best odds of getting what you need. At the same time, even that comes down, by definition, to chance, and people who win those bets do so because they've stacked the deck in their favour.

Let's unpack that a little more. 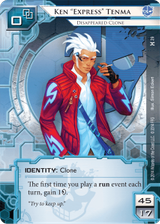 Partly, this means that some decks are always going to be relying on lucky wins. My Ken Tenma deck, for example, has basically no late-game strategy. It has almost no strategy at all. The games it won, it most often won because it got an Account Siphon or two off early, and then got 'lucky' with The Maker's Eye or Legwork. Even while trying to defend the idea that there's no luck in Netrunner, I still want to say that my wins were more luck than anything. And I think that's as true as it is false. The wins are lucky. I need to have the right cards in hand at the right time, and I need to hope that my opponent doesn't have the right ice to stop me. If I don't get Account Siphon off, then my economy just can't keep up with any half-decent Corp. I need my early digs to hit some agendas, because I likely won't be able to get into those servers later in the game.

At the same time, knowing all that, I push everything towards that idea, going all-in on that strategy. There are (now) 3 Account Siphons in the deck, as well as 3 of each of Legwork and Maker's Eye, and 3 Same Old Thing. Various tricks like Recon and Inside Job help me work around ice that I can't beat, and Special Order helps me get the breakers I need to beat ice when I need to. Because I know that I need to be lucky, everything about this deck pushes me to be luckier. Sometimes it doesn't pay off, but I think that a lot of that comes down to my ability (about so-so) and my deck (threw it together in 10 minutes). 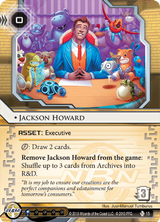 Now, clearly Criminals are the most obvious beneficiary of making their own luck, because that's how Criminals are supposed to play. Anarchs also have this to a large extent, although this is sometimes termed “variance”, meaning they run the risk of being punished by their own bad luck. Shapers, on the other hand, seem to want to prevent the luck element, and this is perfectly valid too. Rather than diving towards a luck-based win and trying to turn the odds to their favour, Shapers often try to beat the luck game by not participating, and making sure that everything is set up to go their way. Two sides of the same coin.

It's not just runners, either. Glacier builds of Corps such as Weyland and Haas-Bioroid are likely to be trying to avoid the luck-based element of gameplay, playing around it by shoring up their defences. A trap-based Jinteki deck might be on the other end of this spectrum, hoping to hit the runner with a Snare or Junebug at just the right time, perhaps following up with a Ronin or Neural EMP for the win. For any Corp, the presence of Jackson Howard proves that luck is a part of the game, while simultaneously helping to remove it.

So what does this mean?

For a start, what this partly means is “stop whining about your bad luck”. We all do it now and then. I do it a lot. It's frustrating to lose because of what felt like a lucky random access, or a bad hand, and it's true that sometimes these situations are unwinnable. But, more often than not, that means one of two things:

In both of these situations, while luck is clearly the factor involved in victory, it can't all be chalked up to a bad hand. Accepting the part that both you and your opponent played, and how each of you responded to the situation of luck, might reveal a weakness in your play or deck, or might allow you to accept the skill of your opponent.

Whether it was your mistakes that cost you the game, or your opponent's skill, accepting that there was more to it than just luck can help you become a better (and less bitter) player. If that sounds reproachful, that's because it partly is. Mostly I reproach my less experienced self, who used to lose a lot of games to luck, and now loses a lot of games to better players instead. What this also means is “there is such a thing as luck in Netrunner, so be prepared for it”. Yes, I know, directly opposed to what I said at the beginning, but that was just a ploy to get you to read, remember? In reality, you need to accept that you will get unlucky sometimes, and you need to be prepared for that. That may mean shoring up the weaknesses in your deck against luck, by trying to prevent unlucky situations from occurring. Or it may mean embracing the winds of fortune, and surfing them towards victory through timely plays and your skills of induction.

Either way, when you realise that luck is an important part of Netrunner, you'll also realise that there is no such thing.