Fresh from his recent victory at the Reading Store Championships, Brendan from Oxford has kindly written up an excellent primer for Noise (and given that I have been personally taken apart by his Noise deck, I'd say it's well worth a read!).

A runner needs to steal 7 agenda points to win the game (unless you're playing Harmony Medtech!). When Netrunner first came out, people quickly calculated how many random accesses it takes to be pretty assured of winning a game assuming roughly 10 agendas (each 2 points). The answer is roughly 18. Sometimes it's more, sometimes it's less. How much that 'spread' is either side of 18 is known as 'variance', but the average is roughly 18. 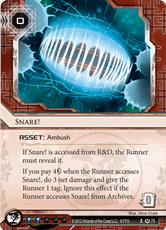 Most of the time, accessing even a random card - say from the top of R&D - is a difficult, drawn out affair, involving breaking ice and accessing a single card (or having to play or install a multi-access card like Legwork or R&D Interface). You are vulnerable to traps like Snare! or Shock!, or upgrades that keep you out. It would be a lot easier if you could install a bunch of malicious programs that make life difficult for the Corporation, each of which gives you a random access when you decide to run Archives.

Which is exactly what Noise does.

The goal is not necessarily to get your 18 random accesses from the Noise passive ability, but you can certainly expect 2-4 points every game from this effect. This makes for a game involving much less expenditure on the Runner side, and a Corporation that is put heavily under the clock to win before those random accesses simply turn into victory for the runner - or the trashing of agendas or other key cards makes victory impossible for the Corporation!

There are two goals a Noise deck wants to accomplish:

1) Stop the Corporation from winning.

2) Install a lot of viruses for those cheap easy accesses. 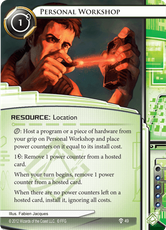 Ideally you want viruses that prolong the game (allowing you to install more viruses). Let me be clear: this is the order of priority. It's no good having a deck that can install hundreds of viruses if the corp is able to win in a handful of turns. Noise has inevitability on his side: unless the corp scores something goofy like a Hades Fragment, you're going to win by passive accesses eventually. You just need to drag the game out to that that messy end. Don't squander this opportunity by letting the corp get an early win!

A long time ago, many Noise decks used Personal Workshop: loading up a huge number of Viruses on the workshop, and then Stimhacking into Archives to install them all at once for giant scores. The only tools really needed to prolong the game was Stimhack and Crypsis (and the ubiquitous Parasite/Datasucker), to stop the Corp rushing out of small remotes. That sort of deck satisfies both the above requirements - Crypsis and Stimhack prolongs the game, by locking out remotes, while Personal Workshop installs a lot of viruses. 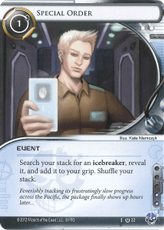 Noise came into resurgence recently with one card (Cache) that I'll talk about shortly, but the pieces were already in place for an upswing. Corp strategies generally abandoned rushing out agendas behind a few cheap ice, favouring taxing ice that is either porous (Eli 1.0) or expensive (Tollbooth) or low strength (Quandry) or some combination. These decks either took their time to assemble impenetrable remotes (HB or RP glaciers) or used the cheap but effective tax to keep runners out until their fast advance combo arrived (NBN or HB fast advance). Noise can only exist in such a world: if other Runners could not so quickly assemble a rig to get into any early remote, all Corps would be rushing out agendas behind mid-strength end the run ice and Noise would have no chance, Special Order, SMC, Test Run: other people play these, so we don't have to!

In this world of fast advance, asset economies and taxing ice, how should we assemble a more modern Noise deck? Mostly the same: viruses and money. 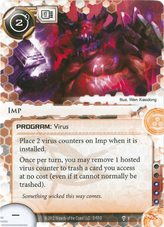 If 'virus' were a dirty word, Noise wouldn't work. Fortunately there are a lot of viruses (particularly in faction) that are really good cards, finding homes outside Anarch very often:

Parasite (normally combined with Datascuker) is the bread-and-butter of many Noise decks. Normally used to remove taxing ice, in Noise this is much more of a versatile card: you can bust your way into a central with it, or bring down low strength end-the-run ice that the corp is trying to score behind. It's easy to forget this also trashes a card from R&D in the heat of the moment.

Imp lets you trash assets or upgrades for cheap, forcing the corp to defend them even if they relied on the economic cost to do so before. But if you can get into centrals, you can also take out troubling operations like Scorched Earth or Biotic Labour, or even ice before it reaches the table. 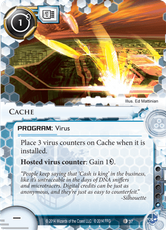 Medium is a powerful multi-access tool if the corp can't mount a defense. If they're broke, you've Parasited the ice away, or they can't afford to defend both R&D and another important target, this can provide powerful pressure. Sometimes just the threat of it can force more ice dedicated to R&D than a corp can spare, as a Medium running loose can end games very quickly. Lategame, if they haven't purged the counters away, the threat of a last-ditch big multi-access run is real. It also has additional synergy with Noise's ability, as knowing the top card of R&D can let you install a virus to deliberately trash that card - targeted trashing is very powerful. And if you can run again, Medium lets you dig even deeper.

Cache is an economic star in Noise decks, but it's not clear why at first. Costing 1 credit to install and giving 3 back from the virus counters, it's worse than an Easy Mark (though it is a virus, and the access/trash is surely worth a credit). At a single blue pip of influence, it's very affordable.

Crypsis is neutral, but is still a virus. As an AI breaker it is expensive to install and use, but if you're not planning on making repeated runs on centrals every turn it's more than enough to cut through early remotes and stop corps scoring that way.

All of these cards are not only viruses, but they are very aggressive cards that must be responded to. By presenting credible threats to the corp - deep digs into R&D, Imp critical combo pieces in HQ, milling of agendas into archives - you are forcing the corporation to respond to you, rather than get busy scoring.

Anarch have a lot of in-faction support for viruses: Deja Vu lets you recur them (particularly potent for Parasite and Cache) while Djinn lets you tutor them and hosting resolves memory issues. Grimoire gives both memory and a bonus virus token on install - very strong for Crypsis (saving a click), Parasite (letting you install and instantly trash ice at strength 1), Datasucker (saving a run), Imp (trashing an extra card - Imps with 3 tokens can often provoke a wipe from the corp, often a good trade for you) and Cache (boosting its return to +3 credits after install). It also sets Medium up as good as an R&D Interface straight away and gives 2 memory for a mere 3 credits. It's hard to argue with the power of Grimoire in a virus heavy deck, but installing it early can set an already slow deck back further. 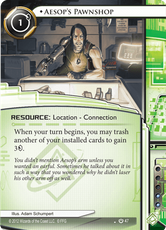 The first piece to the economic puzzle is Aesop's Pawnshop, a card around which almost all of the deck revolves around. You are installing lots of cards, and those cards take up MU. Eventually they're going to have to go to make room for new ones. This isn't economically sustainable without Aesop's, who takes away the opportunity cost of installing most things (much like Desperado takes away the opportunity cost for running).

1) Daily Casts goes from net +5 to +6 and pays out a whole turn earlier (selling immediately after it is left with 2 credits on it).

2) Imp can be sold after using its counters - playing an Imp you'd have discarded at the end of your turn is now no worse than clicking for a credit, and immeasurably better when the random trash from R&D can often provide an access and the tokens can be used to trash expensive assets/upgrades or even juicier operations or ice if you can get into a central.

3) Cache goes from +2 net credits to a whopping +5: better than Sure Gamble and it mills a card. It's +6 with Grimoire out, and you can Deja Vu two of them. At this point it should be clear why Cache has brought Noise back to the forefront of Runner builds.

3) D4v1d can be sold after use, making it net neutral to play.

4) Wyldside can be turned off.

5) Earthrise Hotel can be sold before it ends (drawing 4 cards over 2 turns for 1 credit).

Other cards also become very interesting with Aesop's Pawnshop: Bank Job, Scheherazade (normally after it's done some work), Armitage Codebusting (+1 credit, pays out after less clicks), Liberated Accounts (pays out after 3 clicks instead of 4), Dog Breakers... the list goes on. 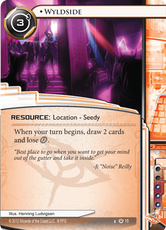 This leaves a lot of flexibility left in Noise slots - they're usually left for more money, draw (Wyldside or Earthrise, or Inject) and some spare influence (Clone Chip is a great splash).

Rather than flesh out the rest, and particularly with Order and Chaos just released, I'll end this on an Anarch deckbuilding note: there are no tutors in Anarch. This means your cards really need to be versatile and useful. The in-faction breakers are very powerful, but their specificity is where many Anarch decks have crumbled. This is why so many people are excited about Eater, while the Cutlery is probably going to see much less play than Parasite.

When it comes to Noise, this means threats like Imp, Datasucker and Parasite are ones you want - they force a response, and they're almost always useful. Cards that are always useful and add a threat across many board positions at once: when it comes to Order and Chaos, those are the cards I'll be looking at for including a Noise deck.