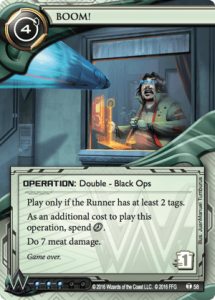 Dave Hoyland takes us through his brutal railgun deck, winner of multiple tournaments all over the world.

In the article, Dave will cover the killing combo itself, the typical runner counter plays and useful ways in which the deck might be tweaked according to your particular meta.

Enjoy it while it lasts!

Last month saw the conclusion of the first #UK StimHack League, with John O’Brien crowned champion in a nail-biting final after Ciaran Maxey missed the Explode-a-Palooza that Johno’d carefully put out there on about turn 1. For those of you who missed it, the streamed games are available on Ben Ni’s YouTube channel (and are well worth watching, for both the commentary and the game play).

We took some soundings from the slack community about the format of the league itself, and the finals, and have made some changes for #UK StimHack League 2, which will start on Saturday 17th September).

The first league lasted for 3 weeks, and at least 16 completed games were required as a prerequisite for making the finals. Feedback was that a slightly longer duration, and a lower hurdle, would be better, and so the second league will run for 4 weeks, with 12 completed games required to qualify.

Secondly, a number of people said that they’d stopped playing after it became clear that they wouldn’t qualify – and we want to encourage people to keep going, you never know when you’ll hit a hot streak! So, all those players who log 12 completed games will get a special limited edition custom alt-art – AstroBrook Shallot Program. 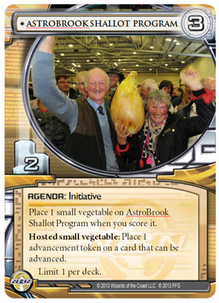 We will stick with the top 4 players who’ve completed 12 games making into the finals, but the format of the final will be double elimination rather than round robin.

Taking part is easy – play a game (preferably, 2), against someone else from the #UK StimHack Slack community, and log the results into the #UK StimHack League 2 Challenge Board. There are people on the channel pretty much any time of the day and evening, and we are a friendly bunch! The password is glazebrook.

To join the slack channel, if you’re not already part of it, you can get an invite at this link.

If you have any questions, ping Russell (tolaasin on #uk) or Cathy Underwood (emilyspine on #uk).

Good luck and have fun!