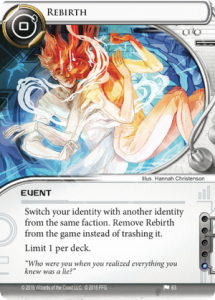 When Rebirth was first revealed from The Liberated Mind – the fifth data pack in the Mumbad cycle – many Netrunner players, myself included, started to ponder how they might use it.

A zero cost event giving you the ability to switch your Identity card to another in the same faction, Rebirth certainly sounds good, conjuring up images of a surprised Corp player who has set up to defend against one ID, floundering as he or she has to react to a sudden shift in the Runner’s play.

Of course, Rebirth has its limitations. It is one influence; it is removed from the game instead of being trashed so you can’t use it more than once and it is limited to one copy per deck. You can’t depend on it as a reliable strategy because you might never see it.

It also presents difficulties during the deck-building process. The cards you include in your deck are based around your Identity card and synergise with its ability. To build a deck where the cards will work for not one, but two identities could prove problematic and lead to dead draws and redundant combos.

With these limitations in mind, I tried to think of a deck and two identities that could negate the issues, at least to an extent, and provide Rebirth with the opportunity to give you the best of both IDs.

Which led me to Blackguard.

Blackguard is the criminal console released late in the Spin Cycle that provides you with two extra memory units and the ability: “Whenever you expose a card, the Corp must rez it by paying its rez cost, if able.” 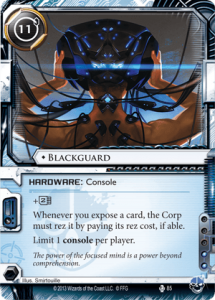 There is no denying the strength of that ability and the control it can have over your opponent’s economy. Using cards like Infiltration, Satellite Uplink, Snitch and Raymond Flint you can drain the Corp’s credits by having them rez Ice, Assets and Upgrades and if you pilot it well, it can open up running opportunities on servers they can no longer afford to protect.

Blackguard even has an ID card tailored for it – Silhouette (which doesn’t get any easier to spell, however many times you write it!) – Dressed in the Blackguard gear, this stealth operative exposes a card the first time she makes a successful run on HQ.

There’s a problem with Blackguard though. And it’s a big one. All eleven credits of it.

Yep, it costs eleven credits to get Blackguard on the table and that is prohibitive for any deck, even a Criminal one.

It is this problem that caused many who tried to build for Blackguard to turn away from Silhouette and to the one ID that could provide that reliable early credit boost – Andromeda. 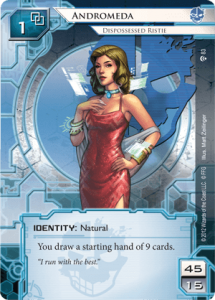 For a long time everyone’s favourite lady of Netrunner, Andromeda gives you a starting hand of nine cards and you can mulligan into another nine if you have to. This provides the best chance in the game to get what you need right from the off, which for many Andromeda players is a massive kickstart to their economy.
In those nine cards you want to see four you can play out straight away so something like two Sure Gambles, an Easy Mark and a Dirty Laundry dive into Archives is not an unusual opening for Andromeda, giving you an excellent monetary advantage in the early game.

The big opening hand also has more chance to draw the Blackguard and now you have the money to install it.

After that first turn though, Andromeda’s ability is done. She has given you a great start, but now it’s up to you. So what if you could then switch your ID to something with a lasting affect? See where I’m going?

Rebirth (which you have a better chance of drawing with Andromeda, despite the single copy in your deck), can be played out to switch to Silhouette and take advantage of her natural synergy with Blackguard – only this time, she has the credits to work with. 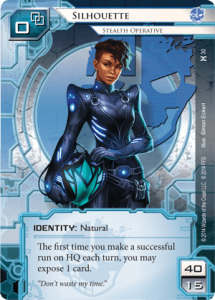 If you still don’t see Rebirth, even with Andromeda’s help, your deck still has all the exposing tools at hand, you just won’t get Silhouette’s.

Rebirth can’t get around the ridiculous cost of Blackguard, but combining it with Andromeda and Silhouette, the cost is offset somewhat and Blackguard as a concept, is perhaps made a little more efficient and workable.

What are your thoughts on this use of Rebirth? Does it make Blackguard a more enticing prospect or would you use Rebirth differently? Let us know in the forums.

Discuss this article on our forums!